One by One by Ruth Ware 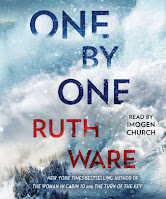 One by One by Ruth Ware
Read by Imogene Church
Published September 2020 by Gallery/Scout Press
Source: audiobook checked out from my local library
Publisher's Summary:
Getting snowed in at a luxurious, rustic ski chalet high in the French Alps doesn’t sound like the worst problem in the world. Especially when there’s a breathtaking vista, a full-service chef and housekeeper, a cozy fire to keep you warm, and others to keep you company. Unless that company happens to be eight coworkers...each with something to gain, something to lose, and something to hide.
When the cofounder of Snoop, a trendy London-based tech startup, organizes a weeklong trip for the team in the French Alps, it starts out as a corporate retreat like any other: PowerPoint presentations and strategy sessions broken up by mandatory bonding on the slopes. But as soon as one shareholder upends the agenda by pushing a lucrative but contentious buyout offer, tensions simmer and loyalties are tested. The storm brewing inside the chalet is no match for the one outside, however, and a devastating avalanche leaves the group cut off from all access to the outside world. Even worse, one Snooper hadn’t made it back from the slopes when the avalanche hit. As each hour passes without any sign of rescue, panic mounts, the chalet grows colder, and the group dwindles further...one by one.

This is the fifth book by Ware that I've read and it's safe to say that I'm a fan. But I may have read too many of Ware's books in the past year (3) to fully appreciate her writing and to be unable to overlook the places where I feel like she's fallen back on things she's done before. We've seen Ware do the unassuming, dowdy young girl who has deep dark secrets; we've seen her do the chase scene between our heroine and the murder that goes on and on; we've seen her do a group of people trapped in an isolated location.

Maureen Corrigan's review in The Washington Post raves about this one, particularly the ending. Kirkus Reviews calls the construction of this book "simply masterful." So maybe it's just me. After all, Corrigan has this to say about the ending: "The final section, where the last intended victim is locked in a ghastly battle of wits and endurance with the unmasked killer, has to be one of the most ingeniously extended plot climaxes in the suspense canon."

Ware uses dual narrators: Liz, the dowdy young girl who used to work for Snoop and who has been included in this trip because it turns out that she is very important to the company, and Erin, who works for the resort and who also has secrets she's hiding. Ware uses a little gimmick as she introduces each narrator which really started to annoy me and which only once gave any clue to what was happening in the story.

I know all of this sounds like I didn't like this book at all, after telling you that I'm a fan. Actually, while this isn't my favorite Ware book, I did enjoy it and appreciated that way Ware middle part when the murders start, one person after another being killed in different ways, including one in a locked room. Ware has us looking at the each murder again and again, giving readers the clues they need to solve the mystery but throwing so many other things at us that it's hard to see the truth. And I really enjoyed the wrap up at the end, that part where the survivors come together; Ware still had a couple of surprises and moral dilemmas to throw at readers.

If you're a fan of Ware's, and you haven't read three of her books in less than 12 months, I think you'll enjoy this one.