Lots of stuff for you this week, some bookish, some just fun. 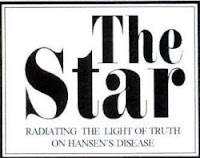 I was so excited to open my email the other day and find an email from Jim Krahenbuhl, Director of the National Hansen's Disease [leprosy] Programs with HRSA, in response to my post about books dealing with the leprosy colony at Carville. He tells me that he's greeted with surprise when he tells his bosses that leprosy still exists (and they're in charge of it), so I don't feel so bad about being unaware of it. He also gave some recommendations for other places to learn more:

"You might find the recent book, Squint, by Jose Ramirez, also of interest. Jose was confined to Carville in the late 1960’s and has devoted his life to overcoming the psychosocial stigma of leprosy. There is also the definitive history (through 1967) of Carville by Stanley Stein, a longtime resident patient (1931-1967) who became a world renowned crusader for patients’ rights and diminishing the stigma. Stein founded THE STAR a patient-run newsletter that is still available on line. In its hay-day the STAR sent 50,000 copies per issue around the world. Of course the completely unnecessary quarantine laws of that era (1940’s and 1950’s) required the newsletter be sterilized. See: http://www.fortyandeight.org/star.htm Finally there is a terrific DVD, Triumph at Carville, done for PBS in 2008. "

At The Huffington Post, I found this list of Indie Bookseller's picks for summer reading, which includes Justin Cronin's "The Passage" and "The Singer's Gun" by Emily St. John Mandel.

Lisa, from Bibliophiliac, awarded me the Sunshine Award. Lisa is an art lover and high school English teacher who also happens to be fond of poetry. Thanks, Lisa! Be sure to check out Bibliophiliac!

Just for fun--20 fictional characters whose names you didn't know, including Barbie, Cap'n Crunch, and The Man In The Yellow Hat from Curious George.
Posted by Lisa at 6:00 AM