What I Thought I Knew: A Memoir by Alice Eve Cohen 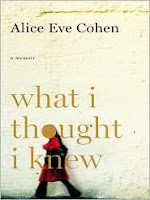 What I Thought I Knew by Alice Eve Cohen
208 pages
Published July 2009 by Penguin Group
Source: I bought it from Powell's

Alice Cohen was 44 years old and finally in a great place in her life. After going through a tough divorce, she's engaged to be married, mother to a beloved adopted daughter and her career is really starting to take off. Then she begins experiencing unusual medical symptoms. For months Alice went from doctor to doctor until she was finally diagnosed with an abdominal tumor and rushed in for an emergency CAT scan. The technician was thrilled to report to Alice that not only did she not have a tumor, but that she was pregnant. Alice was not as thrilled. For more than 20 years, Cohen had been told she was infertile and there was nothing more she had wanted than to be a mother. But at this point in her life, giving birth to a child was the last thing she wanted to do.

In addition to her advanced maternal age and a lack of prenatal care for the first six months of her pregnancy, Alice's pregnancy was also high-risk because she had been taking estrogen for years, she had a deformed uterus, and had had scans while she was pregnant. Add to that the stress of having such bad insurance that almost no doctor would take it and that almost no doctor wanted to treat such a high risk pregnancy, and the idea of being pregnant was more than Alice could bear.

Cohen takes the reader along on the roller coaster of her pregnancy as she considers the possibility of giving up the baby, having a late-term abortion, or having the baby, as her fiance wants to. The book is by turns shocking, touching, and even, believe it or not, humorous. She has an unusual style of writing which took me a bit to adjust to but it soon began to feel very much like a friend telling her story and I really enjoyed it.

Cohen is brutally honest as she examines her choices set against the backdrop of a family who doesn't seem to think there is any other choice but to have the baby. I found it a wonder that her relationship with her fiance was able to hold up given that he wanted the child and she really didn't and that she was pushing him to get a "real" job when one of the things that she had loved about him was that he did so many freelance things. Throughout the book, Cohen adds a list of "What I Know" that chronicles the facts as she knew them at the various points in the book, which is an unusual thing in a book but which I really liked about the book.

I worried about Alice as I read the book, until I came to this passage, and it so told me that she could love this child.

It's heaven when your baby smiles at you. It causes mothers and fathers to fall in love, over and over, every time she smiles."


This is a book I could not put down once I started it. There is a lot here for book clubs to discuss, which my book club can attest to.
Posted by Lisa at 10:47 PM
Email ThisBlogThis!Share to TwitterShare to FacebookShare to Pinterest
Labels: book club, book review, nonfiction