Ten years or so ago, the pilot light went out on my furnace. The only thing to do while I waited for help was to light the fireplace and spend some time in my robe and slippers in front of the computer. What's all that got to do with this book, you ask? Hold on...I'm getting to that. On a lark, I did a search on my paternal grandmother's name. It's something of an unusual name and I didn't really expect to find anything but, what the heck, there was nothing better to do. Lo and behold, I discovered the family of my great-grandfather's brother. Excited, I called my mom and told her. She took it and ran...and discovered an enormous family of cousins that we didn't even know existed. Including a cousin in Arizona and her husband, who shall hereafter be known as the Arizona cousins. Catchy, I know. I love to see her Facebook posts--he is a wonderful photographer so she posts great shots of nature in their area that is like nothing we have here. And, did I mention, they read.

Arizona cousin was raving about Kim Stanley Robinson's The Years of Rice and Salt on Facebook the other day so, of course, I had to check it out. Here's what she says about the book:

"The Years of Rice and Salt," an outstanding novel by Kim Stanley Robinson, examines the possible rise of civilization without Europeans (who all die of plague in the 14th century). Using the device of reincarnation to hold the story together, the story examines religion, philosophy, culture, history, and math and science. The characters are vital and charismic. The ending is dramatic. Take your time reading through this one. It's well worth it." 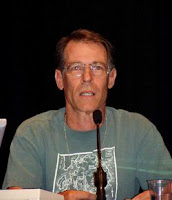 Kim Stanley Robinson is best known as an award-winning science-fiction writer of the Mars trilogy. Anyone who's been following this blog for long would, therefore, understand why I had never heard of him. Other than some Ray Bradbury years ago, I really don't touch the stuff. But this one really intrigues me. And if this is science fiction, then maybe I need to rethink my position on that genre!
Posted by Lisa at 6:00 AM