Lulu and Merry's mother was not the kind of mother that hung their artwork on the refrigerator and made them special after school snacks. Instead she was a mother who cared far more about herself, a mother who threw their father out of the house so she would be able to have her affairs more easily. A mother who told Lulu and Merry never to let their father in the apartment. But one day, he convinced Lulu to do just that and then proceeded to stab her mother to death, stab Merry and then try to kill himself while Lulu ran for help. When he was sent off to prison, the girls were sent to live with their maternal grandmother but when she died, no one else in the family would have the murderer's daughters. For several years they suffered through life in an orphanage until Lulu manipulated one of the counselors to take them into her home as foster children. When she also died, they were left with no one except each other (not always what either of them wants) and a father who Merry continues to visit but whom Lulu refuses to have any contact with.

This book follows the sisters for more than 30 years as they both deal with the tragedy of what happened to their family that day in their apartment. Lulu convinces Merry that they must never tell anyone what happened--all the world, except Lulu's husband, believe that their parents were both killed in a car accident. And that is how Lulu has coped with the guilt--a carefully constructed life in which she does her best to ignore what happened and deny that her father is still alive. She marries, has children and becomes a doctor all the while trying to tamp down the guilt of hating her mother, letting her father into the apartment and being the only one not physically hurt that day. Merry copes in an entirely different way, with the help of alcohol, pills and a string of one-night stands. She spends her life trying to appease her needy father believing that he has to be kept happy, constantly living in fear that he will one day get out of prison. She becomes a victims advocate and probation officer, trying to help others deal with their own issues despite never having been able to completely deal with her own.

Told in three parts (the girls' young live, young adulthood, and adult years) the book shifts narration between the two sisters. Occasionally I found this a little confusing but overall it works very well. Some of the characters and the orphanage scenes seem a bit stereotyped but for the most part Meyers' characters are well thought out and fully written. I really became engaged in watching these girls grow into women and seeing how their mother's murder and father's imprisonment stayed with them always.

Meyer's does a marvelous job of crafting a story that spans a lifetime but still manages to stay focused on the details of the girls' lives. Although it starts with a big dramatic flourish, the book settles into an exploration of what happens to the children in these situations (and heaven knows there are entirely too many of them) and the psychologically aftereffects that will remain with them for the rest of their lives. A terrific debut novel--I look forward to hearing from Ms. Meyers again. 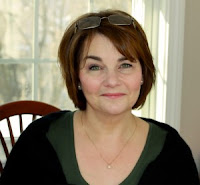 To learn more about Randy Sue Meyers and the book, visit her website or read other reviews on the TLC tour. Thanks to the ladies at TLC Book Tours for including me on this tour!

Posted by Lisa at 7:36 AM
Email ThisBlogThis!Share to TwitterShare to FacebookShare to Pinterest
Labels: book review, fiction, TLC Book Tours