Back in September, when I told you that the book My Mother She Killed Me, My Father He Ate Me had arrived on my door step, I explained that the title of the book came from the Grimm Brothers fairy tale "The Juniper Tree."  I had actually forgotten that when I chose that story for this week's Fairy Tale Fridays, so I was excited when I started reading the story as told in "Grimms Complete Fairy Tales."

In The Juniper Tree, a man's first wife pricks her finger below a juniper tree. When she sees the blood drop into the snow, she wishes for a child as red as blood and as white as snow.  Nine months later she gives birth to a son but is so overcome with joy that she dies.  Her husband then buries her under the tree.

Years later, the man has remarried and he and his new wife have a daughter.  The woman dearly loves her daughter but hates her step-son and abuses him regularly.  One day as he reaches for an apple she has offered him from a large chest, she drops the lid on his neck.  When she realizes that the lid has chopped off the boy's head, she scrambles for a way to hide her guilt.  Using a handkerchief to hide the wound, she places his head back on his neck and sets him outside of the house with an apple in his hand.  His sister, seeing the apple asks him for it but gets no response.  Her mother tells her to ask him again and if she gets no response to give him a box on the ear.  Of course she gets no response and is alarmed when his head falls off.  Her mother tells her that to protect the daughter they must hide what she has done.  Her solution?  She cooks up the son into a meal that she then serves her husband who loves it so much it gobbles it all up.  The daughter, who loved her brother, takes his bones and buries them under the juniper tree.  Shortly the tree parts, and amidst a cloud and fire, a bird flies up from the tree.

The bird flies off and begins singing a song in a nearby village which is so lovely that people are willing to give the bird things to hear the song again.  Once the bird has the things he wants, he flies back to the house and lands in the tree and begins singing.  The father goes out to hear the bird and the bird drops a gold necklace over his head.  When the sister also goes out to listen, the bird drops a pair of red shoes for her. But when the stepmother finally dares to come outside, the bird drops a millstone on her head and crushes her.  Then there was another cloud, another fire, and the bird disappeared and the boy reappeared.

And just what was the song that so entranced everyone?

"It was my mother who murdered me;
It was my father who ate of me;
It was my sister Marjory
Who all my bones in pieces found;
Them in a handkerchief she bound,
And laid them under the juniper tree.
Kywitt, kywitt, kywitt, I cry,
Oh what a beautiful bird am I!" 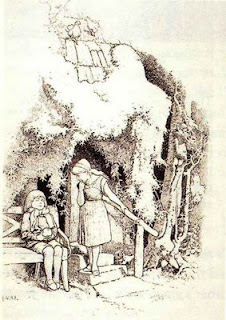 To pair with the original telling, I read Alissa Nuttings adaptation "The Brother and The Bird" from My Mother She Killed Me, My Father He Ate Me.  Nutting stays very true to the original story but give it a fresh slant. In her take, Nutting makes the stepmother a cleaning fanatic who skulks around and whispers, frightening even her own daughter.  The father loves his children but is "aloof" and clearly still obsessed with his first wife.

This time the mother kills her stepson by smothering him with a pillow and a Bible.  Seeing that he has died, she forces her daughter to help her chop up his body, package up the pieces and put the body into the deep freeze.  Then she begins serving her husband sauerbraten made with his body, meals that her husband loves.  The daughter is so appalled that she sneaks the rest of her brother's body out and begins to bury it under the juniper tree.  Again the tree magically transforms the body.

This time the daughter begins hearing flapping noises that soon begin to be heard on the radio as the family listens at night followed by Nutting's take on the song above.  This eventually drives the mother insane.  When the son returns in his new state, the stepmother runs out to chop down the tree and try to kill him again.  But the tree takes its revenge and the son is returned to life.

Nutting says that in her retelling she wanted to "retain not only the father's ignorance but also the original source of hope for the murdered brother, his sister..."  She was fascinated by the Grimm Brothers tale as a child and still finds the story relevant.

This tale has everything I love in a fairy tale, a wonderful beginning (in the Brothers Grimm version the story started "A long, long time ago..."), a wicked stepmother (who not only kills her stepson, but also feeds him to his father and implicates her daughter in his death), and an ending where the bad person gets hers but even then the ending is not altogether happy.
Posted by Lisa at 6:00 AM
Email ThisBlogThis!Share to TwitterShare to FacebookShare to Pinterest
Labels: Brothers Grimm, Fairy Tale Fridays, fairy tales