The Gentleman Poet: A Novel of Love, Danger, and Shakespeare's The Tempest by Kathryn Johnson

The Gentleman Poet: A Novel of Love, Danger, and Shakespeare's The Tempest by Kathryn Johnson
319 pages
Published September 2010 by HarperCollins Publishers
Source: the author for this review

In the early 17th century, a ship named Sea Venture, on its way to the Virginia colony, was shipwrecked instead on the Bermudas, then known as the Isle of Devils.  William Strachey was one of the passengers on the ship and his account of the passengers survival on the island inspired Johnson to write this fictionalized version of events .  It may also have inspired William Shakespeare to write his play, The Tempest" as some believe that he may have had access to the accounts of the survivors before they were otherwise published.

Elizabeth Persons (an actual passenger on Sea Venture) is the shy, orphaned servant to Mistress Horton, benefactress to the Virginia Company.  Both are passengers in a flotilla headed for the Virginia colony.  When a hurricane blows the ship off course, destroying much of the foodstuffs on board, the 155 passengers aboard Sea Venture find themselves stranded on the Bermuda islands.  As much as can be saved is removed onto shore but it's quite clear there is not enough food unless some is quickly found on the islands.  Elizabeth quickly proves herself useful in doing this and despite Mistress Horton's objections, eventually finds herself preparing meals for the survivors on one of the islands.  She also finds herself befriending a man named William Strachey who is supposed to be the ship's historian but more often than not seems to be writing other things.  She also finds herself the object of the ship's cook, Thomas Powell but Elizabeth has no intention of being any one's wife, ever.  What secrets might Elizabeth and William be hiding?  And how will the survivors ever make it off the islands?

Although sometimes predictable, Johnson has crafted an entertaining look at what life must have been like for those brave enough to risk the trip across Atlantic to an unknown future.  The book is well-researched and the descriptions of the islands make it sound like a place the stranded passengers might have preferred never to have left.  Johnson has also included enough realism about the kinds of people that might have been on such a ship to give the book some tension needed to offset the lighter moments.  The idea that Will Strachey might actually have been William Shakespeare was my favorite part of the book.

Honestly, I had a hard time buying into the idea that Elizabeth might become attracted to Thomas given his approach and her initial very vehement refusals. But I know that this kind of thing is also what draws so many to historical romances.  And Johnson, with about 40 books published, certainly knows more about what works for lovers of historical fiction that I do.

Although I did find some of the story line predictable, I was completely surprised by the ending and found it very satisfying as I did the book overall. 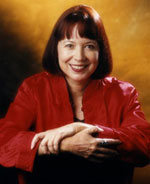 Kathryn Johnson doesn't just write books, she helps others who want to become writers at Write by You.  For tips on writing, check out Kathryn's blog.
Posted by Lisa at 6:00 AM
Email ThisBlogThis!Share to TwitterShare to FacebookShare to Pinterest
Labels: book review, historical fiction