I'm off to a great start reading this year--I've read four books, several short stories and I'm half way through another book on Librivox.  And still I can't keep up with the number of books I've added to my wish list already this year.

The Weird Sisters by Eleanor Brown was already on my radar but the reviews I've been reading have convinced me that it's one I want to read.  Nicole, from Linus's Blanket, reviewed American Uprising: The Untold Story of America's Largest Slave Revolt by Daniel Rasmussen a week or so ago and it ties in so well with one of my reading goals this year that I've added it to the list as well.  Anther non-fiction that's been added is The Memory Palace by Mira Bartok which really impressed Michelle, of red headed book child.  Thanks to everyone who has responded to my request for books set in other countries or written by non-U.S. writers.  I've added several books to the list including Music and Silence by Rose Tremain which was recommended by a friend of my parents who lives in Denmark and which is set in the royal court of Denmark early in the 17th century. 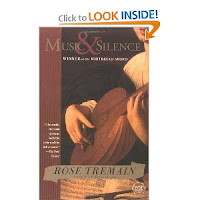 Coming up this week are reviews of The Gentleman Poet by Kathryn Johnson and Krushchev Remembers by Edward Crankshaw (a guest review from my dad) as well as a recap of the Omaha Bookworms discussion with Dori Ostermiller of Outside The Ordinary World and Fairy Tale Fridays where I'll be talking about The Juniper Tree (a Brothers Grimm tale) and spin of it by Alissa Nutting titled The Brother and The Bird.

What are you reading this week?  Has your wish list grown faster than your ability to read, too?
Posted by Lisa at 1:44 PM
Email ThisBlogThis!Share to TwitterShare to FacebookShare to Pinterest
Labels: Fairy Tale Fridays, Sunday Salon