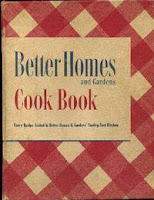 For those of you who don't use Twitter, I can understand why you would think that it's largely a time suck of people posting the minutiae of their lives. But not using it means you don't get to have great conversations with friends, like the one I had this weekend with Trish (@trinicapini) and JoAnn (@lakesidemusing). Trish was talking about using her mother's old Betty Crocker cookbook to try recipes for cream puffs and cobbler. It got the three of us to talking about the old cookbooks our moms have or that we've inherited and eventually prompted me to pull mine off the shelf.

This little baby was published in 1951 and it is both a wealth of knowledge and and a source of amusement. It's a five-ring binder, divided into sections which sometimes baffle me; I often find that recipes are in sections where I wouldn't expect to find them.

I'm impressed with the fact that the very first section is one on nutrition. It has a table for the recommended daily allowances, broken down by men, women, pregnancy, children, male adolescents, female adolescents. Would you like to know what they figured as the average weight of the men and women they were calculating caloric intake for? For men, 154 pounds; for women, 123 pounds. Yikes! I know we're taller than people were in 1951 but for a society so obsessed  with body image and healthy lifestyles, we really have let ourselves go! And these were people for whom Better Homes & Gardens recommended "butter and other spreads" be eaten every day for their vitamins. By the way, American cheese slices are listed under desserts on the calorie chart.

The next section is one for meal planning. It really does have some very practical tips but when it launches into some suggested meals, things get interesting, if for no other reason than the number of courses they seemed to think people would serve. All meals included: meat, fish poultry; appetizer; starchy food; vegetable; bread; salad; dessert; and something labeled "nice to serve." Here's a sample meal you will not be seeing on my table any time soon: veal birds (what is a veal bird?), tomato juice, paprika potatoes, fried onions, Parker House rolls, head lettuce with french dressing, apricot whip and for your "nice to serve" item, bacon.

Just as I did with the first two sections, I found the section labeled "Special Helps" to be both helpful and ridiculous. There is actually a page titled "Gay garnishes." Apparently you're meant to surprise your baked ham with a new garnish - pineapple and cloves. The spice list has about half of the spices shown that I use in my kitchen and the recommended list for things needed to start a kitchen includes only one spoon for cooking. ''Cut your cooking corners" includes a tip on getting onion juice (have you ever seen a recipe that calls for onion juice?) and a suggestion to "spank that cooky with a fork."

I was surprised that there weren't fewer "strange" recipes. When I tried to find images for the recipes that I did find strange, quite a lot of them are were recent pictures. Evidently they aren't as strange as I think they are. Clearly in places like Estonia, for example, aspics are still quite popular. I was surprised to find "foreign cookery" making an appearance already in 1951.The book is loaded with recipes and tips that we may all need to fall back on as a way to stretch our grocery dollars (an entire chapter on canning and freezing, for example). I'm definitely going to be trying the recipe for what is essentially homemade Bisquik.

I have a lot of cook books but, to be honest, I've never really "read" them. I pull them out when I'm looking for recipes. That changes as of yesterday - I have a couple of dozen books in my kitchen that are begging to be read and discovered! Do you read cook books?

Posted by Lisa at 12:30 AM
Email ThisBlogThis!Share to TwitterShare to FacebookShare to Pinterest
Labels: book review, cookbook, food