Today for Armchair BEA, we're discussing genre fiction. What draws you to a particular genre? Do you go for romance? Fantasy? Sci-fi?

Writer's Relief defines genre as: "a category of literature, a way to organize and define various types of fiction.Writing that does not fall into a strict genre may be considered literary (fiction of ideas) or mainstream fiction (driven by a mix of genre fiction and literary fiction techniques)."

Of genres, the one I read the most is women's fiction. Having fallen into most womanly roles during my lifetime (wife, mother, daughter, aunt, sister-in-law), there is nearly always something in women's fiction to which I can relate. The majority of the books I read fall into either this genre or literary fiction. I love to read books about ideas, books that make me think. Let's be clear about the literary fiction, though; I am not specifically looking for an "intellectual" read. I still want to be entertained. 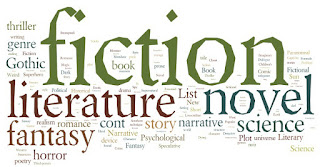 Lately, I seem to be enjoying books that turn the definitions on their heads. Is The Wind-Up Bird Chronicles a work of literary fiction (it is, after all, a fiction of ideas) or is it fantasy? Maybe Kim Wright, writing for The Millions, sheds some light on this when she asks, "Why are So Many Literary Writers Shifting to Genre?"

"Once upon a time, genre was treated as almost a different industry from literary fiction, ignored by critics, sneered at by literary writers, relegated by publishers to imprint ghettos. But the dirty little and not-particularly-well-kept secret was that, thanks to the loyalty of their fans and the relatively rapid production of their authors, these genre books were the ones who kept the entire operation in business."

Wright goes on to say that as the book industry has changed, writers are being force to find new ways to make a living, including writing genre books. But publisher's are also marketing books as genre works which might traditionally been marketed as literary works.

Ursula LeGuin had this to say about genre in a 2012 article:

"I propose an hypothesis: Literature is the extant body of written art. All novels belong to it. The value judgment concealed in distinguishing one novel as literature and another as genre vanishes with the distinction. Every readable novel can give true pleasure. Every novel read by choice is read because it gives true pleasure. Some of these categories are descriptive, some are maintained largely as marketing devices. Some are old, some new, some ephemeral. Genres exist, forms and types and kinds of fiction exist and need to be understood: but no genre is inherently, categorically superior or inferior."

What kind of reader are you - do you favor literary fiction, genre fiction or something that blends both?
Posted by Lisa at 1:30 AM