Songs for the Missing by Stewart O'Nan 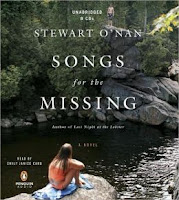 Songs for the Missing by Stewart O'Nan
Published: October 2008 by Penguin Group
Source: bought this on audio at my local library book sale
Narrated by: Emily Janice Card

Publisher's Summary:
In the small town of Kingsville, Ohio, 18-year-old Kim Larsen-popular and bound for college in the fall-disappears on her way to work one afternoon. Not until the next morning do her parents, Ed and Fran, and 15-year-old sister, Lindsay, realize Kim is missing. The lead detective on the case tells the Larsens that since Kim is an adult, she could, if the police find her, ask that the police not disclose her location to her parents. When Kim's car later turns up in nearby Sandusky, Ed, desperate to help, joins the official search. Meanwhile, Fran stays home putting all her energy into community fund-raisers, and Lindsay struggles to maintain a normal life.

We are so accustomed to reading or watching stories like this that give us the big picture. O'Nan looks at the disappearance of Kim from a kind of behind-the-scenes point of view. We're used to seeing the posters go up all over a city but someone had to decide what should go onto the poster, get the posters printed, organize the people needed to put them up. Someone has to organize the volunteers who come out to help in the search for the missing. Someone has to contact the media then decide who should speak for a family, what they should say, and, more importantly, how they should say it. Looking at a disappearance from this angle makes for a unique story that has a much more real feel to it.

Fran is one of those women who seem to become someone new when faced with the worst becoming the driving force behind the search for Kim and the public face. Ed does what you would imagine most fathers would do - he takes on finding his daughter as his job, something he needs to fix, something that is, ultimately, his responsibility. While O'Nan does touch on the distance that develops between Ed and Fran, I would have liked to see him delve more into how Kim's disappearance affected their relationship. I can't help but think that there would be more tension.

O'Nan does a fine job of telling his story in "real" time, emphasizing the passage of time as the family searches for answers. I appreciated the way the story evolved and the way O'Nan showed how life moves on even as this awful thing is never far from the foreground, never too deep in each family member's mind. Perhaps the greatest strength of Songs for the Missing is that O'Nan has not made the Larsen's the picture-perfect, All-American family. Kim is not particularly likable, the family has money issues Ed has been hiding, Fran and Kim didn't really communicate, and Lindsay had conflicted feelings about the sister whose shadow she had grown up in.

By now, you're probably getting tired of me saying that I think I may have liked a book better if I had read it, rather than listened to it. Yet, here we go again. This time I do think it was the narration itself that caused some of the problem. Card does a perfectly acceptable job, particularly in reading the teenagers' dialogue,  except that some times I just didn't feel that her tone was right, the exact way in which she was telling the story. It felt as though the emphasis was off in some places. At least if O'Nan was trying to make the points I felt like he was trying to make.

Songs for the Missing does make for an easy book to listen to, there are no particularly complicated twists and turns, it's short enough that you don't lose track of whats happened or who certain characters are and how they fit into the story.