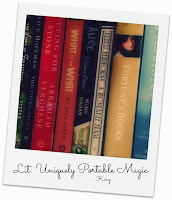 It's award season in book land. It generally doesn't matter to me whether or not a book has won an award or not when I pick it up; I read what I want. The awards often bring books to my attention that I really haven't heard much about before, such as the 2013 Man Book winner Luminaries by Eleanor Catton (who is, by the way, the youngest winner ever of the award). The finalists for the  National Book Award were announced today. There are books on both of the short-lists that I'm already interested in and their inclusion may well make me read them sooner rather than later. This is particularly true when I see the same book appearing on lists again and again. Does winning an award make you want to read a book?

I've added to more books to the list of books I want to read but will never in this lifetime be able to read. These two could not be more different.

These unnervingly familiar headlines serve as the backdrop for Doris Kearns Goodwin’s highly anticipated The Bully Pulpit—a dynamic history of the first decade of the Progressive era, that tumultuous time when the nation was coming unseamed and reform was in the air.

The story is told through the intense friendship of Theodore Roosevelt and William Howard Taft—a close relationship that strengthens both men before it ruptures in 1912, when they engage in a brutal fight for the presidential nomination that divides their wives, their children, and their closest friends, while crippling the progressive wing of the Republican Party, causing Democrat Woodrow Wilson to be elected, and changing the country’s history.

The Bully Pulpit is also the story of the muckraking press, which arouses the spirit of reform that helps Roosevelt push the government to shed its laissez-faire attitude toward robber barons, corrupt politicians, and corporate exploiters of our natural resources. The muckrakers are portrayed through the greatest group of journalists ever assembled at one magazine—Ida Tarbell, Ray Stannard Baker, Lincoln Steffens, and William Allen White—teamed under the mercurial genius of publisher S. S.
McClure.

Well, it's Kearns Goodwin - what more is there to say?

SEVEN DEADLIES: A Cautionary Tale by Gigi Levangie
Dear Bennington College Admissions Officer:
I’m probably not your average applicant from Beverly Hills, CA. And I’m not one to brag, but I’m pretty much the smartest girl in my class at Mark Frost Academy. My grades are excellent. My motivation is high. I don’t drink or do drugs or hang out with the bad kids. I’m pretty much all business. My life is not going to end here, in this part of Los Angeles.
I’m going places.
Which brings me to my latest venture: babysitting teenagers.
A few of the moms talked to my mother. You should see them. They gather around her like Bieber fans. She’s barely five feet tall, beautiful and regal, a Latina queen.
Their diamond bracelets shimmer. I look at those bracelets and want to eat them.
Where did they go wrong?
Can Perry help out this weekend? I have to go to New York for fashion week. I have to go to a premiere. My daughter needs help with biology . . . and staying out of my medicine cabinet.
I get paid forty an hour. I have business cards.
My name is Perry Gonzales. The stories you are about to read are true. The names have been changed to protect the not-so-innocent. By the time you’re finished, I think you’ll appreciate how desperately I need to get out of here.

I read Levangie's last book, The After Wife, and thoroughly enjoyed its light-hearted fun.

What books have you added to your wish list lately?