The Haunting of Hill House by Shirley Jackson

The Haunting of Hill House by Shirley Jackson
Published October 1959 by Penguin Group
Source: this one is mine

Publisher's Summary (edited):
First published in 1959, Shirley Jackson's The Haunting of Hill House has been hailed as a perfect work of unnerving terror. It is the story of four seekers who arrive at a notoriously unfriendly mansion called Hill House: Dr. Montague, an occult scholar looking for solid evidence of a "haunting"; Theodora, a lighthearted guest chosen by Dr. Montague for her possible psychic abilities; Eleanor, a friendless, fragile young woman who may have had previous experience with poltergeists; and Luke, the future heir of Hill House. At first, their stay seems destined to be merely a spooky encounter with inexplicable phenomena. But Hill House is gathering its powers-and soon it will choose one of them to make its own.

My Thoughts:
Do you remember the movie "Signs?" How scary that movie was right up until the point in the movie where you actually saw the alien? It's not that the aliens weren't scary, it was just that what your mind was imagining was so much scarier.

Shirley Jackson understood that in 1959. Not once, in The Haunting of Hill House, does a ghost make an appearance; not once do the characters even see what is making the sounds they hear. Is the house evil? Is there a logical explanation for the things that are happening? Are the characters only imagining the things they think they are seeing and hearing?


""I think we are only afraid of ourselves," the doctor said slowly.
"No," Luke said., "Of seeing ourselves clearly and without disguise.""


Jackson perfectly balances light and dark. Whereas Stephen King set The Shining in the winter, just in time to snow his characters into their haunted dwelling, Jackson sets The Haunting of Hill House at the beginning of the summer when days are long and the light is sharp.Nearly as much time is spent out of doors in the sunshine as in the house. And Jackson mixes in plenty of humor to lighten the mood. Yet it is clear from the start that there is something not right about the house from it's history of suicides and death to its not-quite-true architecture to the fact that doors, curtains and windows mysteriously close not matter how well the inhabitants have braced them open.

Eleanor, central to the story, is also central to the battle between light and dark. She is the is a naive, sheltered young woman, prone to daydreams not nightmares when she arrives at Hill House. Arriving at Hill House, Eleanor is eager to find a home and friendship and thrilled to believe that she has found both despite her awareness that the closer she got to Hill House, the darker the atmosphere became. Almost immediately, her impressions begin to shift. Jackson leaves the reader to figure out if there is something evil about Hill House that has infiltrated Eleanor's mind or if her history has left her vulnerable to her own thoughts and the actions and words of others.

Forty years ago, I read Jackson's short story "The Lottery" and loved it. I don't know why it took me so long to read more of her work. It will certainly not be another forty years. Not only does Jackson know how to get into readers' minds, the lady writes brilliantly with lovely gems tucked into the story.


"She stopped for lunch after she had driven a hundred miles and a mile."

This book was read as part of  R.I.P. VIII and FrightFall Read-a-Thon. 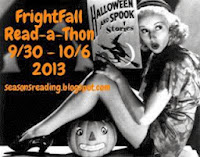