Under The Tuscan Sun by Frances Mayes 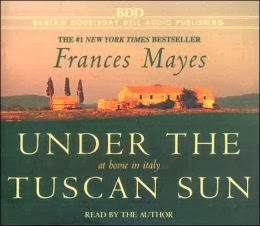 Publisher's Summary:
Buying a villa in the spectacular Italian countryside is a wonderful fantasy -- even if 17 rooms and a garden in need of immediate loving care are included in the asking price. Frances Mayes -- gourmet cook, widely published travel writer, and poet -- changed her life by doing just that. Sprinkled liberally with delicious recipes for inspired Italian dishes, amusing anecdotes about the risks of being your own contractor, and a savvy traveler's reminiscences, Under the Tuscan Sun is Mayes's enchanting account of her love affair with Tuscany: of scouring the neighborhood for the perfect panettone and the perfect plumber; of mornings spent cultivating her garden, and afternoons spent enjoying its fruits in leisurely lunches on the terrace; of jaunts through the hill towns in search of renowned wines; and the renewal not only of a house, but also of the spirit.

My Thoughts:
First off, Under The Tuscan Sun the book is definitely not Under The Tuscan Sun the movie. It took me the better part of the first CD of this audiobook to get over that. True, the movie is no great masterpiece but it has a charm I enjoy. Plus, it's what I was expecting with the exception of a few changes they had made that annoyed the heck out of the people who read the book before they watched the movie. The truth of the matter is that no matter which order you took these two in, you were in for a shock. There was almost nothing left of the book by the time they made the movie. An American woman buys a house in a small Tuscan village that needs a tremendous amount of work. Polish workers, an owl in a storm, a man that leaves flowers every day at a shrine in the wall around her property - that's about as much as the movie and the book have in common. No ugly divorce, no Italian lover, no lesbian friend who shows up pregnant.

Instead Mayes and her husband bought the house and fixed it up over a number of years, the better part of which they spend in San Francisco where they both have jobs. Over the next few years, they will learn that things operate just a little differently in a country where three hour naps in the middle of the day are the norm, that it's still possible to celebrate a Christmas is more spiritual than commercial, and that living off the land will reap rewards that far exceed the work involved. The Mayes' loved Italy before they ever bought Bramasole; in Under The Tuscan Sun Mayes' reveals how the wine, the land, the people, the history, and the food made them fall in love with the village of Cortona.

I've become convinced, over time, that authors make the best narrators for their books. After all, who would know better just how the writer was hearing the words as he or she wrote them? Mayes certainly would as well; unfortunately, she isn't the best person to read them, at least not for me. There was something jarring about hearing a Southern voice talk about Italy I suppose and Mayes' voice is not the soothing Southern voice that can lull me into loosing track of time. Her style of reading is surprisingly hard, in fact. I seriously thought about just picking up the book and giving up on the audiobook. But I had time in the car to "read" the book; not as easy to find that time when not driving so I soldiered on and I got more used to Mayes' reading. I would, however, recommend reading her books rather than listening to them.

Posted by Lisa at 8:59 PM
Email ThisBlogThis!Share to TwitterShare to FacebookShare to Pinterest