Timing being everything, this month's book club meeting was being held on the same night author Alex Kava was speaking at our local Barnes and Noble. Five of us met there to "meet" Kava and hear her talk about her latest book, Breaking Creed. Kava is probably best known for her character Maggie O'Dell and fans will be happy to know that O'Dell appears in this book. But the star this time is Ryder Creed, who trains search-and-rescue dogs. Taking a page from author Tana French, Kava pulled Creed from an earlier novel where he played a minor role and he'll now be featured in his own series. Kava says she's just finished the edits for the second novel, Silent Creed. It was so fresh in her mind that she confessed to having a little trouble remembering the details of Breaking Creed! 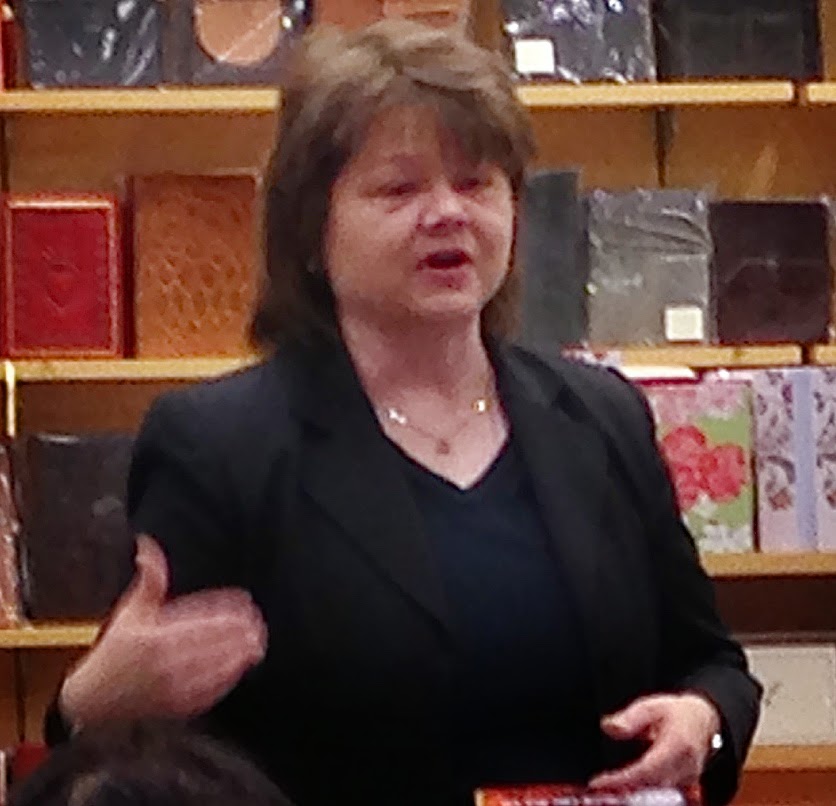 When asked if anything she had ever written about had actually happened, Kava admitted that several things had, although none of the murders, thank heavens. In one book she wanted to write about a hurricane and after some research settled on the name Isaac which hadn't been used. The next hurricane season, though, the "I" hurricane was named Isaac. The scandal with Catholic priests became national news shortly after Kava had written a novel about a murderous priest.

Kava said when writing a book, she writes feverishly for weeks until she's got a book well done but is not an author who writes everyday. She prefers to write her novels out by hand but when pressed for time, she'll often end up typing out the last of a book. She said the writing feels different between the two and can even tell, when reading her own books, which chapters were written each way.

Asked about her own reading habits, Kava said she reads the work of a lot of other writers of thrillers including Lisa Gardner, James Rollins, and Erica Spindler. Like so many authors, Kava said much of her reading time is devoted to research for books which she enjoys because it allows her to learn about so many different things. For Breaking Creed, it meant learning not just about search-and-rescue dogs but dogs in general. Her current research has her learning about North Carolina and spiders.

When teased about having a twisted mind, Kava was quick to point out that she never writes an actual murder, just writes up to the edge of it and leaves it to readers' minds to imagine the rest. She feels confident her readers will come up with something far more twisted than she could.

Omaha fans will have another chance to see Kava when she appears at the College of St. Mary's annual author luncheon in April.
Posted by Lisa at 4:24 PM