A House for Happy Mothers by Amulya Malladi

A House for Happy Mothers by Amulya Malladi
Published June 2016 by Lake Union Publishing
Source: my copy courtesy of the publisher and TLC Book Tours in exchange for an honest review

Publisher's Summary:
In trendy Silicon Valley, Priya has everything she needs—a loving husband, a career, and a home—but the one thing she wants most is the child she’s unable to have. In a Southern Indian village, Asha doesn’t have much—raising two children in a tiny hut, she and her husband can barely keep a tin roof over their heads—but she wants a better education for her gifted son. Pressured by her family, Asha reluctantly checks into the Happy Mothers House: a baby farm where she can rent her only asset—her womb—to a childless couple overseas. To the dismay of friends and family, Priya places her faith in a woman she’s never met to make her dreams of motherhood come true.

Together, the two women discover the best and the worst that India’s rising surrogacy industry has to offer, bridging continents and cultures to bring a new life into the world—and renewed hope to each other.

Thanks to the ladies at TLC Book Tours for including me on this tour. To find other opinions (and most of them liked the book more than I did), check out the full tour. 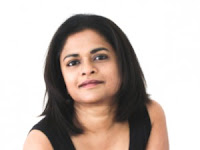 Amulya Malladi is the author of six novels, including The Sound of Language and The Mango Season. Her books have been translated into several languages, including Dutch, German, Spanish, Danish, Romanian, Serbian, and Tamil. She has a bachelor’s degree in engineering and a master’s degree in journalism. When she’s not writing, she works as a marketing executive for a global medical device company. She lives in Copenhagen with her husband and two children.
Posted by Lisa at 12:34 AM
Email ThisBlogThis!Share to TwitterShare to FacebookShare to Pinterest
Labels: book review, India, literary fiction, TLC Book Tours