The Girls by Emma Cline

The Girls by Emma Cline
Published June 2016 by Random House Publishing
Source: my copy courtesy of the publisher through Netgalley

Publisher's Summary:
Northern California, during the violent end of the 1960s. At the start of summer, a lonely and thoughtful teenager, Evie Boyd, sees a group of girls in the park, and is immediately caught by their freedom, their careless dress, their dangerous aura of abandon. Soon, Evie is in thrall to Suzanne, a mesmerizing older girl, and is drawn into the circle of a soon-to-be infamous cult and the man who is its charismatic leader. Hidden in the hills, their sprawling ranch is eerie and run down, but to Evie, it is exotic, thrilling, charged—a place where she feels desperate to be accepted. As she spends more time away from her mother and the rhythms of her daily life, and as her obsession with Suzanne intensifies, Evie does not realize she is coming closer and closer to unthinkable violence.


My Thoughts:
In 1969, followers of cult leader Charles Manson murdered seven people. Three of the people convicted of the murders were young women. 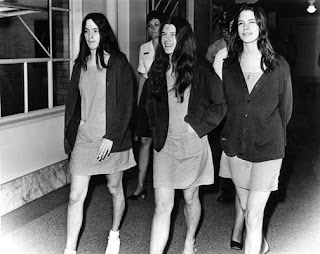 I was a young girl when the murders happened but a young woman when I first read anything about the murders. In my mind, it was easy to understand what made Manson click - he was (is) clearly mentally ill. But, even having been a teenager who often felt adrift, I couldn't understand what might cause those young women to brutally kill for him, what kind of hold he had on them.

Cline was similarly intrigued by those questions. The Girls, loosely based on the Manson murders, focuses on the young girls drawn in by a charismatic puppet master. What would it take to lure a girl in living in a place where clothing is communal, comfort is rare, and food has to be stolen? What kind of girl could be convinced to do such a thing?


"I waited to be told what was good about me. I wondered later if this was why there were so many more women than men at the ranch. All that time I had spent readying myself, the articles that taught me life was really just a waiting room until someone noticed you - the boys had spent that time becoming themselves."

Cline understands that Evie and the other girls who find themselves pulled into cults aren't necessarily girls from rough backgrounds or "bad" girls. She understands they are girls who just want to feel wanted and understood, girls who are growing up to find that life isn't as sure and simple as they had grown up thinking it was.


"That was part of being a girl - you were resigned to whatever feedback you'd get. If you got mad, you were crazy, and if you didn't react, you were a bitch. The only thing you could do was smile from the corner they'd backed you into. Implicate yourself in the joke even if the joke was always on you."

On the ranch, Evie finally feels wanted, seen. Tired of her divorced parents who were so busy trying to create their own new lives to notice their daughter floundering, Evie clings to the people who pay attention to her and show her a life seemingly without responsibilities.


"I was starting to fill in all the blank spaces in myself with the certainties of the ranch."

But there are responsibilities and a price to be paid. What the girls will need to figure out is what price are they willing to pay?

As an adult looking back on her life, Evie is a melancholy woman who has had to live her life in the shadow of what the girls on the ranch did and not knowing, really not knowing, what she might have done if she had been with them.

Cline's writing is fantastic - she sucks you into the story with her vivid "sets," poetic writing and her understanding of what makes young girls tick. Her ability to take such a well-known event and turn the focus back onto the bigger world in a timeless way is impressive. I look forward to Cline's next effort with high hopes.

Emma Cline sold this book, as part of a three-book deal, for $2 million dollars. With that kind of an advance and the subject matter, the book was bound to attract a lot of attention. The question is, was it worth it?

Yes. And no. This is an impressive read, all the more so for being a debut novel. But, in the end, I didn't put the book down and think "wow, that was the best book I've read in a really long time." And shouldn't a book worth a $2 million dollar advance do that?

Posted by Lisa at 5:03 PM
Email ThisBlogThis!Share to TwitterShare to FacebookShare to Pinterest
Labels: based on reality, book review, literary fiction