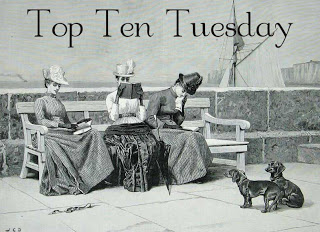 Well, let's just start this list off with the first book that I ever recall making me want to do something and see where that leads us, shall we?

1. Little Women: I was eight and already a lover of books when I was given Louisa May Alcott's Little Women. I wanted to be Jo (even though I knew I was really more of a Beth). Even more, Jo made me want to be a writer. I never did write a book but I still keep notebooks with story ideas, character sketches, short stories, and writing resources. Because a girl's gotta dream.

2. March: Geraldine Brooks borrowed Mr. March from Little Women then reimagined him as more the real life inspiration for that character, Bronson Alcott, Louisa's father. I loved Mr. March so as Father but as March, not so much. March made me dig deeper into the reality of the Alcott family, including reading a couple of books that taught me much more about the family and the crowd they ran with.

4: City of Thieves: I knew about the siege of Leningrad before I read this book. But this work of fiction, for some reason, opened my eyes to just how horrific that siege was for those trapped inside of the German blockade. More, more, I needed to know more. A million and a half soldiers and citizens died; nearly that many more were evacuated. Both armies sustained incredible losses, palaces were destroyed, art stolen. Such a tragedy.

5: The Weight Of Heaven: My first Imrigar book and the book that really set off my love affair with books set in India and the neighboring region. If you've followed me long, you know how much this one book as influenced my reading.

6. The Girl With The Pearl Earring: I'd heard of Jan Vermeer before I read this book, but I knew absolutely nothing about him. Again, I wanted to learn more about how much Chevalier had based this book on fact and how much on fiction and immediately did some research. It's a desire to learn more about the artists I read about that has stayed with me and finds me looking for works by Vermeer and the other artists I've read about any time I'm in an art museum.

7: Loving Frank: Frank Lloyd Wright - icon, pioneer, architect. That much I knew going into this book. After reading it, I wanted to know more about the man behind those incredible buildings. Internet research and a documentary viewing taught me that Horan was spot on in the facts she presented. Wright may have been a visionary, but he wasn't overly concerned with the realities of his visions nor was he a very nice man.

8. Little Heathens, 9. Fried Green Tomatoes At The Whistle Stop Cafe, 10. The Sharper Your Knife, The Less You Cry: If there's anything about food in a book, I tend to spend a good deal of the next week in my kitchen. While Fried Green Tomatoes wasn't a book about food, it did make me want to try fried green tomatoes and other Southern delicacies (not a fan of those tomatoes as it turns out!). Little Heathens had me looking at old school kitchen methods and got me back to doing more freezing and jelly making. Both The Sharper Your Knife and Finn's Kitchen Counter Cooking School are chock full of recipes and ideas and both earned a spot in on my recipe book shelf. They've inspired me to be creative, make use of what I've got and dare to make up my own dressings!

What books have made you want to do something or learn more about something after reading them?
Posted by Lisa at 1:30 AM
Email ThisBlogThis!Share to TwitterShare to FacebookShare to Pinterest
Labels: Top Ten Tuesday