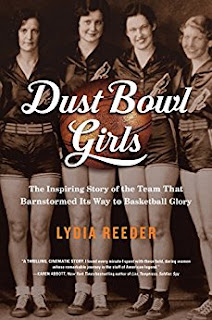 Dust Bowl Girls: The Inspiring Story of the Team that Barnstormed Its Way to Basketball Glory by Lydia Reeder
Published:
Source: my print and egalley copies courtesy of the publisher in exchange for an honest review

Publisher's Summary:
In the early 1930s, during the worst drought and financial depression in American history, Sam Babb began to dream. Like so many others, this charismatic Midwestern basketball coach wanted a reason to have hope. Traveling from farm to farm near the tiny Oklahoma college where he coached, Babb recruited talented, hardworking young women and offered them a chance at a better life: a free college education in exchange for playing on his basketball team, the Cardinals.

Despite their fears of leaving home and the sacrifices that their families would face, the women joined the team. And as Babb coached the Cardinals, something extraordinary happened. These remarkable athletes found a passion for the game and a heartfelt loyalty to one another and their coach—and they began to win.

My Thoughts:
This book initially landed in my mailbox unsolicited. It sounded interesting but I was busy and knew I wouldn't get a chance to read it any time soon. But I did know someone who I knew would be interested in this one, so I put it in the hands of my brother-in-law the first chance I got. He coached girls basketball for a number of years, beginning just a year after girls started playing basketball in Nebraska. He has thoroughly enjoyed it, the history, the basketball, and the coaching. But I doubt he learned as much as I did from it. Because, although I knew that girls had been playing basketball in Iowa for years before they started playing in Nebraska, I still had no idea how long girls had been playing basketball in this country. Nor did I ever know why girls in Iowa had played the three-on-three, half court game they long played. I assumed, going in, that the Dust Bowl Girls were similar to the women who played in the All-American Girls Professional Baseball League during World War II, a group of women who filled in for men when the need arose.

Women, it turns out, have been playing basketball since James Naismith invented the game. In their own yards, on the local playground, they hiked up their skirts and played like the boys. Almost as soon as women started playing, though, restrictions started being put on the ways they could play. Divided courts, no dribbling (yep, that was a rule for a time), and, in 1908, the AAU said women could not play basketball in public. The Women's Division of the National Amateur Athletic Federation worked to ban extramural games and tournaments as "too competitive" for women. Most competitive teams actually played for companies, not colleges.

In a time in our country when people were struggling just to find the money to feed themselves, college was not even a dream for most people. Into the lives of a group of young women came Sam Babb offering a free education and a chance to play basketball. Dozens of young women answered the call but life as a girls' basketball player wasn't easy (they had to practice at 4 a.m. in a gym that didn't even have the heat turned on until later in the day) and, eventually, Babb's team was winnowed down to the girls who most wanted to play. Girls from small towns and farms all over Oklahoma who were required, in addition to their studies and practice, to help teach the Native American children who also went to school on the same campus. Not only that, but in order to cover their costs, the team had to "barnstorm," playing games to earn money.

Reeder spends a lot of time early on giving readers Babb's own history. It felt like the focus of the book, the girls, had gotten away from Reeder and that she was falling into the nonfiction trap of giving readers all of the information she had uncovered in her research instead of sticking to the story she wanted to tell. Or as if Reeder had a particular interest in Babb. It turns out Babb was Reeder's great-uncle. You can hardly blame a girl for wanting readers to understand her particular gateway into this incredible story.

And it really is an incredible story, full of American history, sports history, women's history. Although Babb's team didn't end up playing for a gold medal in the Olympics, the book reminded me very much of Daniel James Brown's The Boys In The Boat - a group of unlikely athletes and a driven coach persevere against the odds and rise to the top. Only this time, it's a story we can use to show our daughters how women can do anything they want if they want it badly enough.

Posted by Lisa at 1:30 AM
Email ThisBlogThis!Share to TwitterShare to FacebookShare to Pinterest
Labels: book review, nonfiction, sports