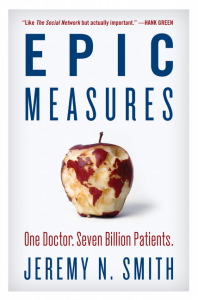 Publisher's Summary:
Moneyball meets medicine in this remarkable chronicle of one of the greatest scientific quests of our time—the groundbreaking program to answer the most essential question for humanity: how do we live and die?—and the visionary mastermind behind it.

Medical doctor and economist Christopher Murray began the Global Burden of Disease studies to gain a truer understanding of how we live and how we die. While it is one of the largest scientific projects ever attempted—as breathtaking as the first moon landing or the Human Genome Project—the questions it answers are meaningful for every one of us: What are the world’s health problems? Who do they hurt? How much? Where? Why?

Murray argues that the ideal existence isn’t simply the longest but the one lived well and with the least illness. Until we can accurately measure how people live and die, we cannot understand what makes us sick or do much to improve it. Challenging the accepted wisdom of the WHO and the UN, the charismatic and controversial health maverick has made enemies—and some influential friends, including Bill Gates who gave Murray a $100 million grant.

My Thoughts:
When I was growing up, every summer we'd hop into the family station wagon, hook up the pop-up tent camper, and head off around the country for three weeks. We thought we were roughing it, tougher than those other sissy campers, because we didn't have plumbing and electrical hookups in our camper.

I'm never going to whine again about having had to lug a 5-gallon jug of water a few hundred feet.

Chris Murray's family hopped in two Land Rovers, jerry cans of water and petrol under the children's feet, and headed off into the sub-Saharan for a year; the family was the entire staff of a hospital without electricity and with very few supplies. Their home had air-conditioning but no windows so, without electricity, they couldn't stand to spend any time in it.

Murray's father was a doctor and his mother was a micro-biologist so it's not altogether surprising that he grew up to be involved in a career having to do with health. But that trip, and the subsequent summer expeditions that followed it, set Murray on the course of his life work.

Some years ago The Immortal Life of Henrietta Laks surprised me by being one of my favorite books of the year. Me. A girl who's idea of science was formed in the eighth grade by a teacher whose name was, I kid you not, Mrs. Boring. I've long since learned that science can be fascinating but to be able to become enthralled by a book about it was still a surprise.

Epic Measures: One Doctor, Seven Billion Patients  proves that was not a one off. Like that book, though, Epic Measures is about so much more than science which is probably why it appealed so much to me. It's about one remarkably complex man who drove a team of 500 scientists to do the impossible. It's about the disconnect between so much of the data researchers have collected, the way theories are constantly changing, and how, sometimes, the obvious is overlooked. It's also about the marriage of medicine, demographics, and humanity. And while it's chock full of science and data, I never felt like I was in over my head. So many questions raised, so much learned. A science book I could not put down. Who woulda thunk it?

Thanks to the ladies at TLC Book Tours for including me on this tour! For other opinions, check out the full tour.

Jeremy N. Smith has written for Discover, the Christian Science Monitor, and the Chicago Tribune, among many other publications. His first book, Growing a Garden City, was one of Booklist‘s top ten books on the environment for 2011. Born and raised in Evanston, Illinois, he is a graduate of Harvard College and the University of Montana. He lives in Missoula, Montana, with his wife and young daughter. Find out more about Jeremy at his website.