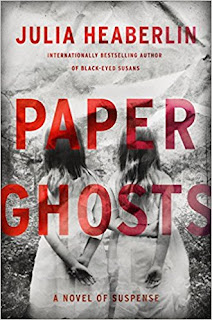 Paper Ghosts by Julia Heaberlin
Published May 2018 by Random House Publishing Group
Source: my e-copy courtesy of the publisher in exchange for an honest review

Publisher's Summary:
An obsessive young woman has been waiting half her life—since she was twelve years old—for this moment. She has planned. Researched. Trained. Imagined every scenario. Now she is almost certain the man who kidnapped and murdered her sister sits in the passenger seat beside her.

Carl Louis Feldman is a documentary photographer. The young woman claims to be his long-lost daughter. He doesn’t believe her. He claims no memory of murdering girls across Texas, in a string of places where he shot eerie pictures. She doesn’t believe him.

Determined to find the truth, she lures him out of a halfway house and proposes a dangerous idea: a ten-day road trip, just the two of them, to examine cold cases linked to his haunting photographs.

Is he a liar or a broken old man? Is he a pathological con artist? Or is she?

My Thoughts:
Two-ish years ago, I read Heaberlin's Black-Eyed Susans (my review) and was impressed enough with it that I didn't even read what this one was about before I requested it on Netgalley. The truth is, I had been disappointed by the ending of that book; but it gave me the creepies big time and I raced through it so I knew Heaberlin was capable of taking me for a ride again. And, oh, what a ride!

Like Black-Eyed Susans, there is almost no violence in the book, and almost no description of the murders of the girls Carl is supposed to have killed, which I very much appreciate in a book. My imagination can handle that part just fine and I really don't need to read descriptions of things that will keep me up at night. The thrill factor relies almost entirely on Heaberlin's ability to get into her readers' heads by making them think about what might happen (or what the heck just happened?) and she is certainly up to the task. More than once, I almost dropped the book in surprise and if this had been a movie, I would have watched peering through my fingers. Heaberlin made great use of Carl's photography; including descriptions of his photographs at the beginnings of many chapters to help readers climb into his head and to paint scenes. It managed to cast an extra layer of eeriness over the story.

Texas comes alive in the book - I found myself, as I so often do when a book piques my interest, turning again and again to the internet to see pictures of the areas Heaberlin is writing about, to see a map of the route Carl and Grace are taking, and to learn more about the historical events Heaberlin writes about.

All that being said, at the heart of this book is a story about the relationship between two people and how it changes and what those changes reveal about each of them. That's something you rarely see (at least in my somewhat limited experience) in this kind of book. I really liked this part of the story and it's what kept the book moving, even in places where the story lagged.

The book is not without flaws. It sometimes drags a bit, as we spend a lot of time in our heroine's head. The biggest flaw, for me, was the fact that, for a person who talks so much about how much she has trained for all situations, that Grace seems to find herself in bad places without a backup plan all too often. And given that most of the "action" is psychological, there wasn't much need for all of her physical training anyway. Perhaps the point was that no matter how well prepared we think we are, there will always be surprises in life we can't foresee. At least that's the reason I'm giving Heaberlin because I liked this book well enough to want there to be a reason for the things I questioned.


"Bad people are to be found everywhere, but even among the worst there may be something good."

I was much more satisfied with the ending to this book than I was with Black-Eyed Susans. Parts were unexpected and other pieces tied up exactly as I wanted them to end. A very satisfying read!