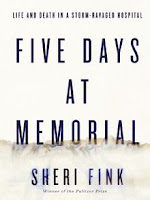 Five Days At Memorial: Life and Death in a Storm-Ravaged Hospital by Sheri Fink
Read by Kirsten Potter
Published March 2014 by Gale Group
Source: my audiobook copy checked out from my local library

Publisher's Summary:
In the tradition of the best investigative journalism, physician and reporter Sheri Fink reconstructs 5 days at Memorial Medical Center and draws the reader into the lives of those who struggled mightily to survive and maintain life amid chaos.

After Katrina struck and the floodwaters rose, the power failed, and the heat climbed, exhausted caregivers chose to designate certain patients last for rescue. Months later, several of those caregivers faced criminal allegations that they deliberately injected numerous patients with drugs to hasten their deaths.

Five Days at Memorial, the culmination of six years of reporting, unspools the mystery of what happened in those days, bringing the reader into a hospital fighting for its life and into a conversation about the most terrifying form of health care rationing.

In a voice at once involving and fair, masterful and intimate, Fink exposes the hidden dilemmas of end-of-life care and reveals just how ill-prepared we are for the impact of large-scale disasters—and how we can do better. A remarkable book, engrossing from start to finish, Five Days at Memorial radically transforms your understanding of human nature in crisis.

My Thoughts:
Do you ever watch Dateline? If you do, you're familiar with the way they present a story in such a way that you are absolutely certain you know what happened and who the bad guy is...and then they present the contradictory evidence and you have no idea what the truth is.

I got that same feeling as I listened to Five Days At Memorial.

Fink begins by bringing readers up to speed with New Orlean's history of flooding and the measures that could have been, but weren't, put in place to prevent future disasters. And then she brings on the disaster. Fink wants readers to know the people who were trapped in Memorial Hospital when Katrina came ashore; more importantly, she wants us to care. Which makes it all the more appalling when the generators stop working. When communications with possible rescuers go to hell. When it becomes so hot inside the building that employees and families (who took shelter at the hospital) are forced to use furniture to break out windows. Medications ran low. Moving patients to the helipad or the parking garage ramp that became a boat rescue landing space was exhausting; and because patients had to be ready to go when rescue arrived, they often spent hours outside. Family members were called into action to help carry patients to rescue and fan those who were bed ridden. Stairwells were dark, floors became slick with the humidity. Difficult decisions had to be made as to who would be rescued first; then, as the situation changed, those decisions were changed. Patients died. And administrators, doctors, and nurses talked about easing patients' pain.

On the fifth day, some medical professionals gave nine patients high doses of medication to relieve their suffering. All nine of those patients died.

When I'd heard about those patients all those years ago, I felt certain that if the choice had been made to euthanize patients, it was the right choice given the dire circumstances and the patients' conditions. By the time those patients died in the book, I wasn't so sure. After all, on day five, even as the patients were being given the medications, mass evacuation was beginning. In the second half of the book, Fink explores the aftermath of the disaster at Memorial that culminated in the arrest of Dr. Anna Pou and two nurses for second degree murder. And here is where your mind really becomes muddled. The investigators, coroners, and prosecutors make valid cases for charging some of the caregivers with murder. But their motives are suspect and their handling of the cases are mangled. Public opinion among the medical community and those who went through Katrina was decidedly biased.

There's no question that there is plenty of blame to go around for all of the deaths that happened with Katrina. The government had known for eighty years that there were things that could, and should, be done to shore up the levee system. Tenet  Healthcare, owner of Memorial Hospital, did not have a proper emergency plan, hadn't moved generators to higher ground, and hadn't even insured that their helipad was safe for landing. The evacuation of the areas impacted was badly mishandled and communication was horrific.

In the end, Fink wants readers to understand that the measures in place when Katrina struck were woefully lacking, from the levees to the power supply to the evacuation procedures to the plan for how to allocate limited supplies in the event of a major crisis. What's more, in the Epilogue Fink details time she spent in Bellevue Hospital in New York when Super Storm Sandy flooding New York City and finds that some of the same problems still existed years later.

As much as I really enjoyed Potter's reading, I often wished that I had been reading this one in print so I could keep track of the players better and so I could highlight the heck out of it. I saw Fink talking about what happened at Memorial a few years ago and knew I was going to love her writing. I was right. This book brings up important questions, it made me think. It made me think that I may need to buy a copy of this book to read again. It was that good.