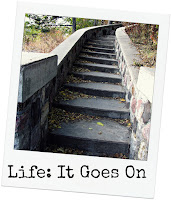 I could have used a snowy pic today; we did have our first snowfall. But I'm so over that snowfall that I can't bear to look at snow again anytime soon. We only got a couple of inches Friday, but it started falling at 6 a.m. and by the time I left for work 45 minutes later, traffic was at a standstill. After over an hour on the "expressway," I bailed and headed home. Others spent more than two hours trying to get into work. Once it stopped snowing, the sun came out, the roads got much better and I headed into work. I have rarely seen traffic the way it was Friday morning and that's saying something, coming from someone who has lived her entire life in a land where it snows. It's going to be a long winter!

Listened To: Five Days At Memorial. I am getting so angry listening to this book. So many people did so many things wrong before, during and after Katrina hit New Orleans, causing so many people to suffer and die.

Watched: We saw Bohemian Rhapsody this week. Overall, we really liked it a lot. A little emotionally manipulative, but such great acting and oh, that music!

Read: I'm DNF'ing The Traveling Cat Chronicles after reading half of this short book. I'm a cat lady but a book that's largely told through a cat's eyes just doesn't work for me. Today I'm starting What We Talk About When We Talk About Rape as part of Nonfiction November. This one's going to be a tough read.

Made: We made a big pot of chicken and noodles that we grazed on through the week. One night The Big Guy made some roasted brussels sprouts which were so good; he pulled each sprout all apart so that we had a pan full of individual leaves that got nice and crunchy. 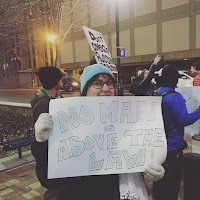 Enjoyed: Getting a text from my son on Wednesday, asking if we were protesting to protect the Mueller investigation. I love that my kids are getting so involved in politics and want to join me in making our voices heard. Mini-him, BG and I all headed out into the cold and joined a hundred or so of our rabble-rousing friends for a spur of the moment protest. And then we rewarded ourselves by grabbing some delicious seafood eats and cocktails. Always enjoy spending time with my kids!

Planning: On working some more on a few projects, including more work on my basement and more work on NaNoWriMo (which, I must confess, is not going so well).

Thinking About: Christmas. I'm sorry, I'm trying to not jump ahead but I'm also thinking of ways to get a jump on things so life is not so stressful in December. Have you guys seen these Christmas tree collars that you use instead of a tree skirt? I'm loving them but I'd like to figure out how to make one instead of spending the money on one.

Looking forward to: Seeing my newest great-nephew, The Prince, in a few hours. He's four months old this past week and we haven't seen him since he was three weeks old.

Question of the week: Anyone else watching all of the cooking shows about Thanksgiving meals obsessively? No? Just me? Mind you, we can't change anything we have on actual Thanksgiving - it's all about tradition, you know. But dang, I'm thinking I need to make a second Thanksgiving meal with some of these great ideas.
Posted by Lisa at 11:52 AM
Email ThisBlogThis!Share to TwitterShare to FacebookShare to Pinterest
Labels: Life: It Goes On