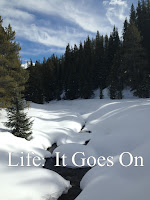 Happy Sunday! We made it through January! This year, more than most, that's great news.
We had quite the snowfall Monday - 12 1/2". Fortunately it was light and fluffy because neither of us has our energy entirely back yet. We seem to be in a system where it just keeps dropping snow on us. We do need the moisture, but I'd much rather it came as rain! Anyone else also thinking about spring and gardens and meals outside?
Last Week I:
Listened To: I was frustrated to get one hour from finishing Memorial Drive and having it go back. Hopefully I can get it back soon. Almost as soon as that went back, Caste became available. I feel like it picks up right where Michelle Alexander left off (in The New Jim Crow) when she introduced the idea of a caste system in the U.S.
Watched: Nothing much other than football last Sunday. I mean, the t.v.'s been on but we've just sort of been watching whatever is on without much thought.
Read: I finished Betrayal at Ravenswick and am now working on Louisa May Alcott: The Woman Behind Little Women. I didn't like Bronson Alcott before I read this and I'm liking him even less now. But I'm also disappointed that Abby Alcott (the inspiration for Marmee in Little Women) wasn't someone I'd particularly like in real life, either.
Made: Thursday was The Big Guy's birthday. Since it was just the two of us, a cake seemed sort of silly. So I made him oatmeal raisin cookies with walnuts, a cookie he loves but which I never make because I don't much care for them. Except that I did really like this recipe so it looks like I'll be making them again.
Enjoyed: Miss H was planning to come up this weekend and then she wasn't going to come because of the forecast. And then the forecast changed and she decided to come up Friday evening. So we've been enjoying time with her and ended up getting to have a family birthday dinner for BG.
This Week I’m:
Planning: I've made my game plan for 40 Bags In 40 Days, which starts February 17 and I'm working on getting things ready so that I can focus on that once it starts.
Thinking About: Finishing sorting the scrapbook project I was working on a few weeks ago that stopped when I was no longer cat sitting.
Feeling: Happy to have had half my kids here this weekend. But so, so ready to be able to be with people again.
Looking forward to: By next weekend I'll feel good and clear of CoVid and I'm planning on heading to my parents so that I can finally hug them.
Question of the week: Are you planning on getting the vaccine when it's available?
Posted by Lisa at 1:30 AM
Email ThisBlogThis!Share to TwitterShare to FacebookShare to Pinterest
Labels: Life: It Goes On