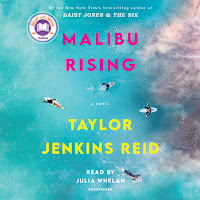 Malibu Rising by Taylor Jenkins Reid
Read by Julia Whelan
Published June 2021 by Random House Publishing Group
Source: audiobook checked out from my local library
Publisher's Summary:
Malibu: August 1983. It’s the day of Nina Riva’s annual end-of-summer party, and anticipation is at a fever pitch. Everyone wants to be around the famous Rivas: Nina, the talented surfer and supermodel; brothers Jay and Hud, one a championship surfer, the other a renowned photographer; and their adored baby sister, Kit. Together the siblings are a source of fascination in Malibu and the world over—especially as the offspring of the legendary singer Mick Riva.

The only person not looking forward to the party of the year is Nina herself, who never wanted to be the center of attention, and who has also just been very publicly abandoned by her pro tennis player husband. Oh, and maybe Hud—because it is long past time for him to confess something to the brother from whom he’s been inseparable since birth.

Jay, on the other hand, is counting the minutes until nightfall, when the girl he can’t stop thinking about promised she’ll be there.

And Kit has a couple secrets of her own—including a guest she invited without consulting anyone.

By midnight the party will be completely out of control. By morning, the Riva mansion will have gone up in flames. But before that first spark in the early hours before dawn, the alcohol will flow, the music will play, and the loves and secrets that shaped this family’s generations will all come rising to the surface.

Malibu Rising is a story about one unforgettable night in the life of a family: the night they each have to choose what they will keep from the people who made them . . . and what they will leave behind.
My Thoughts:
Two years ago and listened to, and very much enjoyed Reid's Daisy Jones and The Six (review here) so it was a no brainer to pick up Reid's latest, Malibu Rising.
Like Daisy Jones, Reid plays with structure here, giving us a decades long history of the Riva family juxtaposed against twelve hours of the day we already know that Nina's house will be yet another of Malibu's famous fires. Because we know that all four of the Riva children will be at the party, we know that they will survive a childhood that sees their father abandoning them not just once, but twice, and a mother who self-destructs when he leaves for the second time. But it's their upbringing that has made the Riva children so close, the fact that they had to rely on each other to survive their mother's collapse, the fact that they discovered surfing together and find their lives tied to it.
But they each have secrets they've been keeping from each other that will be revealed the night of the party, a night they discover another secret they've long suspected and a night they confront the man who all but abandoned them a third time when he didn't come to help them when their mother died.
I was especially drawn to the parts of the story  set in the past, when Reid keeps readers hoping for the best for the family even as she is letting us know that things are going to get worse before they'll get better. We know almost from the minute we meet Mick Riva that he's not going to keep his promise never to leave the children's mother, June. We know from the minute a woman comes to the door and hands June a baby she says she can't keep and thinks he should be with his father that while June may not forgive Mick, she will love this child as her own. We know that even as things happen that could tear the children apart that they will, in fact, be better for what's happened.
This one's getting great reviews, understandably. Reid has written four very strong characters in the Riva children, with very real relationships. For me, though, it suffered from my own high expectations. In the day of the party sections, it felt like Reid was adding too much to help that part of the book hold up to the history of the family. Too many extra characters, too much background on the people who came to the party and then behaved miserably, too much bad behavior. I liked this one but I would have liked it more if Reid had held back some.
Credit Julia Whelan for doing, as always, a terrific job reading this book. I was glad that I opted to listen to this one.
Posted by Lisa at 1:30 AM
Email ThisBlogThis!Share to TwitterShare to FacebookShare to Pinterest
Labels: audiobook, book review, library, women's fiction