Empire of Pain: The Secret History of the Sackler Dynasty by Patrick Raddon Keefe

Empire of Pain: The Secret History of the Sackler Dynasty by Patrick Raddon Keefe
Read by Patrick Raddon Keefe
Published April 2021
Publisher's Summary:
The Sackler name adorns the walls of many storied institutions—Harvard, the Metropolitan Museum of Art, Oxford, the Louvre. They are one of the richest families in the world, known for their lavish donations to the arts and the sciences. The source of the family fortune was vague, however, until it emerged that the Sacklers were responsible for making and marketing a blockbuster painkiller that was the catalyst for the opioid crisis.

Empire of Pain begins with the story of three doctor brothers, Raymond, Mortimer and the incalculably energetic Arthur, who weathered the poverty of the Great Depression and appalling anti-Semitism. Working at a barbaric mental institution, Arthur saw a better way and conducted groundbreaking research into drug treatments. He also had a genius for marketing, especially for pharmaceuticals, and bought a small ad firm.

Arthur devised the marketing for Valium, and built the first great Sackler fortune. He purchased a drug manufacturer, Purdue Frederick, which would be run by Raymond and Mortimer. The brothers began collecting art, and wives, and grand residences in exotic locales. Their children and grandchildren grew up in luxury.

Forty years later, Raymond’s son Richard ran the family-owned Purdue. The template Arthur Sackler created to sell Valium—co-opting doctors, influencing the FDA, downplaying the drug’s addictiveness—was employed to launch a far more potent product: OxyContin. The drug went on to generate some thirty-five billion dollars in revenue, and to launch a public health crisis in which hundreds of thousands would die.

This is the saga of three generations of a single family and the mark they would leave on the world, a tale that moves from the bustling streets of early twentieth-century Brooklyn to the seaside palaces of Greenwich, Connecticut, and Cap d’Antibes to the corridors of power in Washington, D.C. Empire of Pain chronicles the multiple investigations of the Sacklers and their company, and the scorched-earth legal tactics that the family has used to evade accountability. The history of the Sackler dynasty is rife with drama—baroque personal lives; bitter disputes over estates; fistfights in boardrooms; glittering art collections; Machiavellian courtroom maneuvers; and the calculated use of money to burnish reputations and crush the less powerful.

Empire of Pain is a masterpiece of narrative reporting and writing, exhaustively documented and ferociously compelling. It is a portrait of the excesses of America’s second Gilded Age, a study of impunity among the super elite and a relentless investigation of the naked greed and indifference to human suffering that built one of the world’s great fortunes. 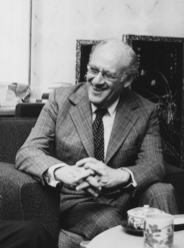 My Thoughts:
That smiling guy is a guy who became incredibly rich (and set up his family to become even more wealthy) by being incredibly ethically challenged. I'll give it to him - the guy was a genius and an amazingly hard worker. He had his hands in every aspect of getting new pharmaceuticals on the market and making a fortune off of them. His advertising agency(s) developed ad campaigns that inflated the efficacy of medications and downplayed the dangers; he was invested in medical journals that wrote glowing reviews of the medications his agency was pimping; and he took a cut of the sales of the medications that he advertised. It was corruption on a level I could hardly believe as I listened to this book.
Arthur passed those ethics right on to his brothers, along with buying them a small pharmaceutical company called Purdue Frederick, a company which would eventually spin off a branch called Purdue Pharma. It developed a method of slowly releasing oxycodone and then marketed it under the name Oxycontin.
Even as Oxycontin (along with other opioids) began to ravage the country, the Sacklers kept their hands clean. They had long kept their individual names quiet when it came to the business and they continually maintained that only people who misused Oxycontin became addicts. Not one of the heirs of the Sackler brothers, including Raymond's son, Richard, who oversaw the launch and barrage of Oxycontin on the country, has ever admitted any guilt. In fact, when it became clear that the company might be financially at risk, the family members made a money grab to protect their fortunes.
Empire of Pain is, more or less, split into two parts - Arthur's story and the rise of the brothers he brought along with him and then the story of Oxycontin. Arthur's story is terrifically interesting, even as it made me more and more angry at the way he was able to game the system and saw nothing wrong with the way he was manipulating the market for drugs he was profiting from.
Then the focus of the book switches. While the family continues to play a big part in the book, Oxycontin, and how it came to overtake the country, became the real story. We learn why the drug was developed, how Purdue Pharma (especially Richard) threw everything they had at making the most money they could out of it, and how medical professionals were convinced to push this product on their patients. Keefe throws a lot of the family into the picture in this part of the book, as he tries to introduce readers to all of the family members who would eventually face charges, but it became hard to keep track of who was who in this part of the book and each of them made less of an impression except in the way each of them reacted when the toil their family's business was taking on the country began to be too big to ignore. Eventually we get to the part where various people begin to try to make the family and the company accountable. To say that I was disappointed in our justice system is an understatement. Money talks. To say that I was angry is an even bigger understatement.
My daughter was a victim of the Sacklers. I've made no secret of the fact that my daughter is a recovering addict. One of the things she was addicted to was Oxycontin. This book was personal for me. This book will be personal for anyone who knows someone who became addicted to this drug, especially those whose addiction escalated to heroin or who died from Oxycontin overdoses (that number includes people who had only taken one pill or who were taking it entirely as prescribed).
Even those of you who were never touched by this drug will find this book fascinating and eye opening. Keefe has done his research and had the courage to publish it despite threats from the Sackler family attorneys. It is a work of narrative nonfiction so it is not without some degree of bias. Still, there is more than enough history and fact here to convince me that Keefe has found the truth.
Posted by Lisa at 1:30 AM
Email ThisBlogThis!Share to TwitterShare to FacebookShare to Pinterest
Labels: book review, legal, medical, medicine, nonfiction, U.S. history