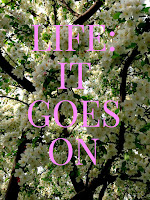 Ok, we're not quite to blooming trees yet but it's officially spring so I'm busting out the spring photo. We're certainly getting the spring showers, though. We're well into our second week of grey skies; how do people in the Pacific Northwest survive all of the dreariness?! My kingdom for some sunshine!

On the plus side, I don't so much mind doing 40 Bags in 40 Days in the basement when I'm not missing sunshine by being down there, so there's that, I suppose.

Listening To: I'm very much enjoying That Old Cape Magic by Richard Russo while I'm driving; Arthur Morey does a bang up job reading it. When I'm home alone, my Spotify playlist is including a lot of Avett Brothers, Sarah Jarosz, Brandi Carlile, and Josh Ritter and when I'm working out I've been listening to the The History Chicks talk about Catherine the Great.

Reading: Well, I am finally reading again, although I haven't had a ton of time to do it lately. I did finish Epic Measures (and reviewed that) and A Gate At The Stairs (review this week). I'm hoping to finally finish Assassination Vacation in the next couple of days so I can add a new book to my nightstand and then its' on to The Shadow Land by Elizabeth Kostova.

Making: It's been a lazy week in the kitchen - baked potatoes, salad, omelets. And we ate out an astonishing, for us, three times, last week. I did whip up a couple of banana breads yesterday.

Planning: On several trips to drop off donations this week - a third trip in five weeks to Goodwill, two to different homeless shelters. I'm serious about getting things out of my house that we're not using when they are things other people could use. 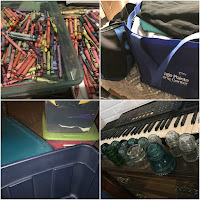 Thinking About: What I've got left to do during 40 Bags in 40 Days. I've got a long way to go in my basement but this time I'm hell bent to get the job finished before I give up on it. I swear, when I'm not actually sorting, purging, and reorganizing, I'm thinking about doing those things. Thus, the lack of reading time. 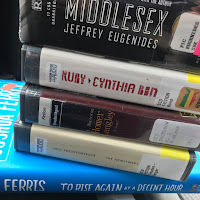 Enjoying: Wedding planning. As in, we've been sampling food for the reception dinner. It's a tough job, but someone's got to do it!

Feeling: Like someone who's trying to reduce the "stuff" in her house probably shouldn't been bringing more books into it, even virtual books so I've been working really hard to keep myself from doing that. Until Thursday when I bought five new books. In my defense, in total they only cost $10 and four of them will never come into the house. Which of the audiobooks would you listen to next if you were me?

Looking forward to: Dinner today with my parents and siblings at my parents. Yep, I get out of cooking again!

Question of the week: How sentimental are you when it comes to holding onto things? My hardest things to sort are the things that were my kids', family photos, and things that came from family.
Posted by Lisa at 1:30 AM