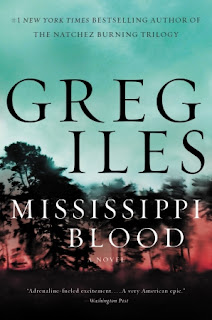 Because my parents first introduced me to Penn Cage and this trilogy, I knew as soon as this book became available that I would be putting in their hands first for review. Below is my dad's review of Mississippi Blood.

Publisher's Summary:
The endgame is at hand for Penn Cage, his family, and the enemies bent on destroying them in this revelatory volume in the epic trilogy set in modern-day Natchez, Mississippi—Greg Iles’s epic tale of love and honor, hatred and revenge that explores how the sins of the past continue to haunt the present.

Shattered by grief and dreaming of vengeance, Penn Cage sees his family and his world collapsing around him. The woman he loves is gone, his principles have been irrevocably compromised, and his father, once a paragon of the community that Penn leads as mayor, is about to be tried for the murder of a former lover. Most terrifying of all, Dr. Cage seems bent on self-destruction. Despite Penn’s experience as a prosecutor in major murder trials, his father has frozen him out of the trial preparations–preferring to risk dying in prison to revealing the truth of the crime to his son.

During forty years practicing medicine, Tom Cage made himself the most respected and beloved physician in Natchez, Mississippi. But this revered Southern figure has secrets known only to himself and a handful of others. Among them, Tom has a second son, the product of an 1960s affair with his devoted African American nurse, Viola Turner. It is Viola who has been murdered, and her bitter son–Penn’s half-brother–who sets in motion the murder case against his father. The resulting investigation exhumes dangerous ghosts from Mississippi’s violent past. In some way that Penn cannot fathom, Viola Turner was a nexus point between his father and the Double Eagles, a savage splinter cell of the KKK. More troubling still, the long-buried secrets shared by Dr. Cage and the former Klansmen may hold the key to the most devastating assassinations of the 1960s. The surviving Double Eagles will stop at nothing to keep their past crimes buried, and with the help of some of the most influential men in the state, they seek to ensure that Dr. Cage either takes the fall for them, or takes his secrets to an early grave.

Tom Cage’s murder trial sets a terrible clock in motion, and unless Penn can pierce the veil of the past and exonerate his father, his family will be destroyed. Unable to trust anyone around him–not even his own mother–Penn joins forces with Serenity Butler, a famous young black author who has come to Natchez to write about his father’s case. Together, Penn and Serenity–a former soldier–battle to crack the Double Eagles and discover the secret history of the Cage family and the South itself, a desperate move that risks the only thing they have left to gamble: their lives.

Greg Iles opens his newest book with this line: “GRIEF IS THE most solitary emotion; it makes islands of us all.” And there’s grief to spare in this one. But hope, too.

Movie-goers well recall how Hollywood made two excellent movies based on Mario Puzo’s character Vito Corleone, THE GODFATHER, and his family, but then followed those two gems with one more effort, which was a complete bomb. 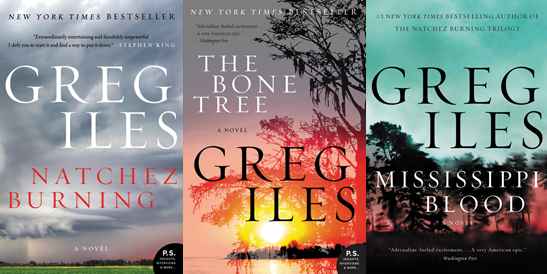 You readers, on the other hand, have my assurance that Greg Iles has not wrapped up his giant story with anything like that kind of thud. In fact, as well-crafted as NATCHEZ BURNING and THE BONE TREE, are, he has capped them off with the best of the trilogy. MISSISSIPPI BLOOD is just stunningly good. I’m a slow reader, who has a lot of other things occupying his time. A book this long might well have taken me a couple of months to get through, But I finished it in a week and wished there had been at least a couple hundred more pages.

All the surviving family, friends, allies, and mortal enemies of Natchez Mayor Penn Cage show up again this time, along with a few additions, including a dynamite lady, Serenity “Tee” Butler, who is so interesting that I can well imagine Iles using her in a spin-off.

The fate of Penn’s father, Doctor Tom Cage, still hangs in the balance. He’s in jail, awaiting trial for the murder of his one-time nurse and lover, and he’s still holding back from his family and his attorney information they regard as essential to winning an acquittal. Further frustrating Penn, Tom’s attorney, the elderly and ailing legal whiz Quentin Avery, is being no more forthcoming as to the strategy he intends to use when the case comes to trial.

Snake Knox, the last truly dangerous member of the Double Eagles, who have been terrorizing black people and whites alike in the region for fifty years, is still out there, still elusive, and still willing to sacrifice anyone who represents a threat to him and his plans.

You’ve read and seen a great many fictional trials, but prepare to be amazed by what Iles does with Doctor Tom’s time in court.

I won’t give you excerpts from this book. The publisher warns against it, and, besides, I don’t want to risk depriving you of one single bit of the pleasure I’m convinced this book is going to give you. Think of how often when watching a movie you’ve said, “Well, dang, I knew that was coming. They ran it in the previews on TV.” Not gunna do that to ya.

Spoiler alert: About 500 pages in, Iles hit me between the eyes with a mallet. I presume you read sitting down, but, if not, I recommend it. I’m glad I was.

I have only one tiny complaint. To my way of thinking, Iles has put in one chase scene that goes on too long, stretches credulity a bit, and really didn’t have to be there at all. You’ll know it when you get to it.

Have you not read NATCHEZ BURNING and THE BONE TREE? You would get into MISSISSIPPI BLOOD more smoothly if you have, of course. This is, after all, the last chapter of a long continuous story. But, like this one, those are long books and if you don’t think you have the time to read them first, Iles, without interrupting the flow of this story, fills you in on who’s who and what’s what. Read carefully in the first pages and with a little effort I’m sure to you can catch up.

This is, of course, a work of fiction. But Iles, who surely is one of the pre-imminent authors of this genre, prefaces his story with this quotation from ALL THE KING’S MEN by Robert Penn Warren: “For the truth is a terrible thing.” Iles writes so convincingly that you could sell yourself on the idea that all this has, in fact, really happened and that, if so, then Penn Warren had it right.

Thanks, Dad, for a great review! I knew I was right to put this book into your hands for review!

For other opinions about this final book, check out the full tour. Thanks to the ladies at TLC Book Tours for including my family on this tour (my mom has read the book as well, at this time, and I'll be reading it soon).

Greg Iles spent most of his youth in Natchez, Mississippi. His first novel, Spandau Phoenix, was the first of thirteen New York Times bestsellers, and his new trilogy continues the story of Penn Cage, protagonist of The Quiet Game, Turning Angel, and #1 New York Times bestseller The Devil’s Punchbowl. Iles’s novels have been made into films and published in more than thirty-five countries. He lives in Natchez with his wife and has two children.


Posted by Lisa at 1:30 AM
Email ThisBlogThis!Share to TwitterShare to FacebookShare to Pinterest
Labels: book review, mystery/thriller, TLC Book Tours