A Gate At The Stairs by Lorrie Moore 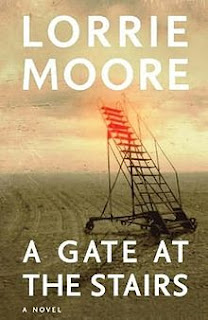 A Gate at The Stairs by Lorrie Moore
Narrated by Mia Barron
Published September 2009 by Knopf
Source: my print and audio copies both purchased at my local library book sale

Publisher's Summary: Tassie Keltjin has come from a small farming town to attend college in Troy, “the Athens of the Midwest.” She's swept into a thrilling world of books and films and riveting lectures, high-flying discussions about Bach, Balkanization, and bacterial warfare, and the witty repartee of her fellow students. At the end of the semester, Tassie takes a job as a part-time nanny for the newly adopted child of Sarah Brink, the owner of a trendy downtown restaurant, and her husband, Edward Thornwood, a scientist pursuing independent research. Tassie is enchanted by the little girl. Her feelings about Sarah and Edward are less easily defined, and as she becomes an integral part of their family, the mysteries of their lives and their relationship only deepen. She finds little to anchor her: a boyfriend turns out to be quite different from what he seems; vacations in her hometown are like visits to an alien country; and her loving, eccentric family no longer provides the certainties and continuity that shaped her childhood.

My Thoughts:
At the end of 2009, A Gate At The Stairs appeared on a number of "Best of 2009" lists, including the New York Times and Slate. This despite the fact that most of them acknowledged plot issues. They were that impressed with Moore's writing.

I'm inclined to be a little less forgiving. Why, you may ask? Because in addition to all of those plot issues, I so very often found myself thinking "now that doesn't seem at all possible" or "I don't see how that would work." When I begin to find myself distracted in that way, it's hard for me to appreciate what's good in a book, or a movie, or life, for that matter.

It's a lot of little things. Like, why is a woman who owns an upscale, inventive restaurant at home so much of the time? And why has Sarah worked so hard to adopt a child we rarely see her interacting with? Why does Tassie dislike her mom so much? And how does a full-time college student have so much time to nanny and have a boyfriend she spends quite a lot of time with? Also, even though I was cool with ghosts in Lincoln In The Bardo, when they appeared in this book I might have thrown the book across the room...if it weren't an audiobook...and I hadn't been in my car.

Still, I do agree with those who put this on their "best of" lists that Moore's writing can be impressive. Edward and Sarah host a group of parents who have adopted children of other races and the conversations that Tassie overhears (although how she manages to overhear whole conversations while caring for a number of children is another of those things I questioned) ask racial questions I hadn't considered. That's always a good thing, right?

Then, too, there are two scenes in the book that broke my heart. Both were the kinds of scenes, like auto accidents, that you wanted to look away from but, because they are so well written, you find yourself unable to put the book down. One of them will stay with me for a very long time.

Will this make my list of best books I've read in 2017? Probably not. But it was worth reading because it made me think and because it left a mark on my heart.

When The Stars Go Dark by Paula McLain

My Dear Hamilton by Stephanie Dray and Laura Kamoie

The Color Purple by Alice Walker