An Interview with Kristen Tsetsi, Author of "Homefront"

Have I mentioned before how much I love blogging? I do; I love blogging. About a week ago, I was, once again, reminded of one of the reasons I love blogging. Authors want to talk to me! I had added to my blog that I was currently reading "Homefront" by Kristen Tsetsi. A couple of days later, I got an email from Kristen saying that she had happened upon my blog and was thrilled to see that I was reading her book. As an author of a self-published book, Tsetsi is in charge of her own marketing, so she was more than willing to do an interview. Yea!

1. Home Front is semi-autobiographical. What made you decide to tell your own story?

Well, what makes it semi-autobiographical is that I couldn't have written it if I hadn't experienced a wait through a deployment. The events (minus the war timeline) and the characters are all fictional.

Tim O'Brien writes in The Things They Carried, "Story truth is sometimes truer than happening truth." My personal story was not exceptional enough to be a novel; I didn't want to write about me. I wanted to write about the larger story, so I relied on fiction to convey the emotional truth of that larger story.

What made me want to write it, though, was that there were a number of books - fiction and nonfiction both - delving into the soldier experience, but there was little (if anything) that made readers feel with equal intimacy and rawness the complex emotions plaguing those who don't know from one day to the next whether the person they love most will be killed that day.

2. Like Mia, you were a cab driver for a time. The down sides to that seem pretty obvious. Where there any things about the job you liked?

I absolutely love driving. I used to try to snag my sister's Big Wheel before my legs were long enough to reach the pedals. When I was a little older, I would take advantage of any opportunity to steer my dad's car. I even wanted to grow up to be a truck driver or a school bus driver. So, the driving part of cab driving was a lot of fun. And the experience itself is one I'm glad I had. Cab driving was something I'd always wondered about, and now I don't wonder, anymore. 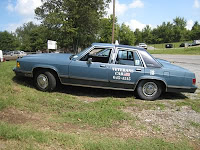 There are real Donnys everywhere. Anyone who has ever met a troubled Vietnam veteran knows Donny Donaldson. I did know a man over a decade ago who said he was a Vietnam vet, and who inspired the Donny Donaldson character, but the two are different people.

4. Since Home Front does deal with real events in your life, were you concerned about any of the people portrayed in it being upset with you? What has been their reaction?

Because the characters in Homefront are fictional (or composites, at best), there was no one around who might be upset (thank goodness). Wait - my best friend did identify a fragment of her personality in Denise, but she liked the part she recognized. (The strength, the blunt honesty.)


5. Your writing style is very unique in this book. When you started writing was it a conscious decision to mix in the very short bits with the longer, more traditional sections?

Yes. I wanted every passage, every chapter, to read in such a way that Mia's mood would be immediately obvious. I also didn't want to write a traditional novel - I wanted to play with writing and form and language and everything that is fun about writing. Poets are usually the ones to take full advantage of that freedom, and I saw no reason not to be just as free in a novel. I wanted to be able to end a paragraph mid-sentence, or use one word per line, or write half a page of narrative without a period - anything that would best convey the thought processes and intimate moods of the narrator. So, I did.

At some point, my short stories started feeling like they could be longer. Or, maybe it's that I was suddenly able to envision them continuing beyond the final page. After Ian (my boyfriend at the time, and my husband, now) returned from Iraq, and after enough time passed that the memory of his absence began to poke at me as a story needing to be written, I knew the year he was away was such a complex and powerful experience that it would take something the length of a novel to communicate it.

Novels are more difficult for me. I developed a big love for short stories very early on because they're so densely packed, so intense, and so intentional, that there's a constant challenge to whittle the whole thing down to, essentially, a climax. I never thought I would be able to write a novel because there's just so much FILLER. Words and words and words and words...the "what next" and "what now?" are my primary source of novel-writing frustration.

But when I remember each chapter is essentially a short story, it gets a little easier.

7. What made you decide to self-publish?

Impatience and reality. After querying for a while, I realized that it could take years to find an agent. After that, it could take years to get the book published (or to even be picked up by a publisher, if I were so lucky). I didn't want to wait. It's an important story relevant to the times, and there are hundreds of thousands of people going through an intensely traumatic and confusing and horrific experience right now. They have been since 2001. Actually, they have been since wars began. Even so, their story is rarely told, which puts them in the position of feeling inconsequential on top of what they're already going through. (You have no idea how many military spouses/significant others feel guilty about wanting to talk about their weaker moments - they're not at war, so what do they have to complain about, right?)

I wanted the book to be available to them so they would have a companion, and I wanted it to be there for those who talk about war like it's a story on TV. I want them to know the people whose lives are affected, and in what way they're affected. And I'm not talking about being left alone having to take care of a house - I'm talking about the way a regular day is affected when up to fifteen emotions clash in any number of combinations on a daily basis. I'm talking about what it means for there to be no such thing as a "regular" day.

When approached through a blog survey I created, spouses and significant others were quick to respond to my questions about what they go through when their loved one is deployed: sleep loss, anxiety, depression, and sometimes a wall between family and friends who can't understand what they're going through. Of course, all of the responses were anonymous. (I'm always sure to include significant others with spouses because love doesn't begin at marriage, and often if you're not married during a deployment there are certain privileges they're not entitled to.) The one question I didn't ask that I wish I would have is, "What thoughts and emotions do you have that make you feel guilty?" Because I know I had many of them (which I included in one way or another in Homefront) that would be difficult to talk about.


8. Can you tell us what inspired Backward Books and how you got it up and running? How do you draw authors to Backward Books?
Henry Baum (author of North of Sunset and The American Book of the Dead) and a man who chose to leave to pursue other ambitions were actually two of the first people behind Backword Books. They invited me in, and then came the rest. Henry and the other man had the idea to bring together a group of authors who would be a mutli-armed marketing force. Because independent publishers (or self-publishers - whatever your preference) don't have the benefit of a publisher name behind them and, as a result, their books aren't likely to show up on bookstore shelves across the country, the more people there are to create a buzz about the writing, the more likely readers are to hear about it.

As for drawing authors to Backword Books...those literary authors we've asked to join have said yes readily, for the most part. We look for someone who not only has a good book (we look at any published reviews, and then one of us reads the book), but who is also an active promoter of his or her own work. We want people who will write a blog now and then, who will help brainstorm marketing ideas,who will take part in group ideas (such as interviews, virtual book tours, appearing on radio shows) and who will share relevant links and news with their friends and acquaintances. Those who don't want to actively market end up losing interest in being a member.

I'm working on my second novel, The Year of Dan Palace (working title). Dan Palace experiences a sudden awareness that he may not have long to live. From that moment on, he behaves as if he has nothing to lose, and his relentless quest for his own happiness wreaks havoc on the lives of those who care about him.

TV. I love TV. What do I like to watch on TV?...Oh, so many things. But, to choose some favorites (a few of which should cause shame, but what can I say? I'm a sucker for drama) - Dexter, Medium, 30 Rock, Burn Notice, Mad Men (favorite-favorite), Californication, House, Project Runway, and the New York and Orange County Real Housewives. (But, honestly, if the TV is on, I can find something to watch. I rarely watched it when I was a kid, so I guess I'm making up for it. My time would be better spent reading, of course. Or writing! Probably writing.)

Kristen is a former reporter for the Journal Inquirer newspaper, former Women’s eNews correspondent, former APSU (adjunct) English professor, former Clarksville, TN cab driver, editor of American Fiction, and the author of Homefront , the short story collection Carol’s Aquarium, and the short, little book How to (Not) Have Children

To learn more about Kristen, her writings, Backword books, and Kristen's work providing support for our troops, please visit these links: