For the final Friday of the month of love, it seems only fitting to showcase "Beauty and the Beast."  Of all of the fairy tales I've read (so far anyway), this one exemplifies love developing in a way that is most believable.  That is, if you find it more believable that two people might learn to love each other over time, even despite appearances, rather than love at first sight as is so common.

One source states that the story was first collected in 1550 and that Charles Perrault popularized the tale in 1697.  But versions of this same story seem to go back as far as the second century and Apuleius' The Golden Ass and the story of Cupid and Psyche.
The version of the tale as we have come to know it was first published in 1740 by Gabrielle-Suzanne Barbot de Villeneuve with an adaptation in 1756 that even more closely resembles the story that I read this week (although it is to her that the book gave credit for the tale) and which dropped the back stories of Beauty and Beast that de Villeneuve had incorporated.

Beauty is one of 12 children of a once wealthy merchant who has fallen on hard times.  His sons now have to farm and the daughters work hard in the house; the sons don't so much mind it but the daughters, with the exception of Beauty, are very saddened by their hardship.  After a couple of years, the merchant hears that one of his ships has finally come into port and he hurries off to take care of business with a long list of things his daughters want him to get them.  Beauty asks only for a rose.  Unfortunately when the merchant arrives in town, his former partners have already split up the profits from the ship.

Despondent, the merchant sets off, six months later, on his return journey.  As the weather was so bad, his journey was taking an exceedingly long time and when he came upon an avenue leading to a castle, he decides to seek shelter.  He finds the castle welcoming although no one seems to be around until he plucks a rose for Beauty and is suddenly confronted by a beast.  The Beast agrees to let the merchant go after he learns what has happened to the merchant on the condition that in one month the either the merchant will return to stay or one of his daughters will.  The man agrees and the Beast sets him on his way with trunks full of treasure.

When Beauty learns that the reason her father was found out by the Beast is because of the rose, she volunteers to take her father's place and eventually the two of them return to the castle.  Once again, when the merchant leaves he is sent off with trunks full of gifts.  Over time Beauty grows to understand Beast and to feel for him.  Every night at dinner he asks if she will marry him and every night she declines.  After some time, the Beast allows Beauty to return to see her family for two months.  While with her family, Beauty dreams every night of a handsome prince but she's also warned in her dreams that if she doesn't return, the beast will die.  When it comes to her in a dream that he is, in fact, dying, she rushes away from her family to return to Beast.  When she discovers him, she finally realizes she loves him.  That night when he asks her to marry him, Beauty agrees to be Beast's wife breaking a spell and returning Beast to his human self.  This being a castle, he is, of course, a prince.  And "Beauty and the prince lived happily ever after." 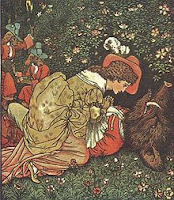 As one of the early versions of the tale of Beauty and the Beast is the story of Cupid and Psyche, I decided to read Francesca Lia Block's take on that tale in My Mother She Killed Me, My Father He Ate Me.  But I'm going to wait to tell you about this story ("Psyche's Dark Night") until Monday when I'll be launching Mythology Mondays.  The story of Cupid and Psyche is as much a myth as it is a fairy tale so it seems like the perfect way to end the month of love and kick off the new feature.
Posted by Lisa at 6:00 AM
Email ThisBlogThis!Share to TwitterShare to FacebookShare to Pinterest
Labels: Fairy Tale Fridays, fairy tales, Mythology Mondays