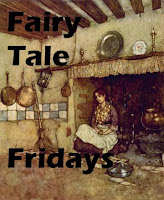 In honor of this being the month of love, I thought it was only appropriate that we look at some of the princess fairy tales in February.  Kicking it off is the tale of Cinderella.  There are thousands of versions of the tale of Cinderella from countries all over the world as from as far back as 100 B.C.

One of the earliest versions to incorporate the wicked stepmother, stepsisters, slipper and hunt by the king for the owner of the slipper was written in 1634 by Giambattista Basile, an Italian. But it was Charles Perrault who introduced the elements of the fairy godmother, the pumpkin and the glass slipper in 1697. 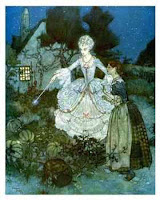 In the 19th century, the Brothers Grimm recorded the German version of the tale which is called Aschenputtel.  In this version, there is no fairy godmother.  Cinderella receives help from a tree growing on her mother's grave.  The wicked step-sisters do much more than just try to squeeze their feet into the slipper; they each cut off a portion of their foot to make it fit.  And the retribution for their meanness to Cinderella in this version?  Not her forgiveness and generosity, which they find in the Perrault version.  In true Grimm Brother's fashion, pigeons pluck their eyes out.

I found the Perrault version of this tale on a new-to-me site called SurLaLune Fairy Tales.  This is the version that Disney adapted, although they did include the birds that help Cinderella in the German version.  Of course they did; they're Disney and there always have to be helpful animals.  Except that, not surprisingly, the animals in the Brothers Grimm tale do not talk and sing. In Perrault's hands, the stepsisters are ugly and Cinderella's father was a doormat for her stepmother and allowed his daughter to be treated like a servant.  No wonder she was so eager to rush off and marry a man she hardly knew who seemed to only love her for her looks. 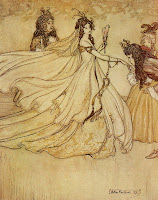 In the Grimm Brothers version of the tale, beauty inside doesn't equate to beauty inside; the stepsisters are also beautiful on the outside.  But once again, Cinderella's father seems to have forgotten that the third girl in the house is his own flesh and blood.  I was happy to see the my Grimm's Complete Fairy Tales included a version of this story that had not been sanitized.  When the slipper doesn't fit the first stepsister, the stepmother hands her a knife, telling her to cut off her toe, which she does, making the slipper fit.  Off she rides to be wed to the prince but singing birds betray her secret.  The second stepsister then tries on the slipper and is convinced by her own mother to cut off part of her heel to make the slipper fit. She, too, is betrayed by a bird.  At the wedding procession of the Prince and Cinderella, the stepsisters, wishing to curry favor, walk alongside the carriage but pigeons deliver their just reward by plucking out their eyes. 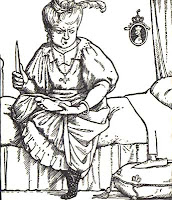 In My Mother She Killed Me, My Father He Ate Me, Stacey Richter uses the basic premise of the Cinderella story (girl is saved by boy) in a modern setting where being swept off your feet by a man is not necessarily a good thing.  In A Case Study of Emergency Room Procedure and Risk Management by Hospital Staff Members in the Urban Facility, our young heroine was actually kidnapped by Prince, a meth making, hog riding, gang member who turns his Princess into the premier meth maker in the area as well as an addict.  The story is written in the style of an actual case study, citing notes and records from Princess' time spent in rehab.  It's an unusual way to tell a story but it works well, probably because it was inspired by actual research into methamphetamine conducted while Richter was also contemplating a fairy tale she was writing for a friend.  Lesson to all of the young girls out there: boys are bad!
Posted by Lisa at 8:04 PM
Email ThisBlogThis!Share to TwitterShare to FacebookShare to Pinterest
Labels: Brothers Grimm, Charles Perrault, Fairy Tale Fridays, fairy tales