It's been a long time since I did an "All Things In Common" post, a feature where I talk about the book I'm reading that have surprising things in common. Sometimes a name will reappear from one book to the next. Sometimes, a particular event will occur in one book and two books later, the same event shows up. Themes seem to recur without any effort on my part to read books revolving around a particular theme. This week the surprising thing I found in common between two books I've been reading was the 13th-century Italian poet Dante Alighieri, more commonly known simply as Dante. 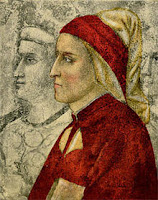 Dante is best known for his Divine Comedy, particularly the third of the book called Inferno in which the Roman poet Virgil guides Dante through the nine circles of hell. The Matthew Pearl's debut novel, The Dante Club, a group of poets, including some historical figures, band together to assist Henry Wadsworth Longfellow in translating Divine Comedy from Italian to the first English translation (which is fact) and end up helping to solve a series of murders based on the punishments depicted in Inferno (which is fiction). Clearly I was aware that this book would involve Dante when I popped that first CD into the player.

The surprise came on the same day I finished listening to The Dante Club when I was reading Elizabeth Gilbert's Eat, Pray, Love at lunch. In explaining why she wanted to learn to speak Italian, Gilbert explained the reason the Italian language is so beautiful and poetic. It turns out that what is now thought of as "Italian" is based on Dante's written dialect, particularly the language of Florence in his time but not strictly limited to it. Prior to the Renaissance, the various city/states of Italy each had their own language but in the 16th-century a debate began in an effort to find one common language.

Well, damn, there I go again, reading strictly for pleasure and having my brain just stuffed full of new and interesting information, some of which might even be useful some day. Heck, The Dante Club made me even seriously consider reading Dante, if for no other reason than that not having read it makes me feel far inferior to 19th-century readers. Those folks demanded four printings of Longfellow's translation of Divine Comedy in the first year of its publication. In this century we've turned Fifty Shades of Grey into a best seller. Just sayin'.

Do you ever notice coincidences like this in your reading?

Posted by Lisa at 1:30 AM
Email ThisBlogThis!Share to TwitterShare to FacebookShare to Pinterest
Labels: All Things In Common