Katy Perry: An Unofficial Biography by Alice Montgomery
Published September 2011 by Michael Joseph, an imprint of Penguin Books
Source: our copy courtesy of the publisher in exchange for this review

Some time ago, well quite a while ago actually, I was approached with the opportunity to review this book.  It wasn't anything that I was interested in but I sure knew someone who loves Katy Perry. Thinking that maybe this was just the thing to get my reluctant reader to pick up a book, I asked Miss H if she'd like to read this book and do a review of it. "Sure," she said. When the book arrived she sat right down and started reading it. And then she stopped reading. Months passed and then one night she discovered that what I've been telling her for years is true. Reading when you can't sleep is a great way to pass time and try to help yourself fall back to sleep. So now I've got two things: a book review and another chance to say "I told you so." Not that I would ever say that, of course!

Ever since the international chart-topping hit, I Kissed a Girl, Katy Perry hasn't stopped making headlines. From reaching number one in charts worldwide to selling out concerts around the globe, her phenomenal success has propelled her to the A-list. But it didn't always seem like she was destined for stardom. Brought up in a deeply religious community, Katy was allowed to listen only to church music. However, with her astounding musical gift, along with plenty of willpower, Katy was determined to follow her dream. Her rise to the top was cemented in 2010, when after a flurry of media gossip, she married the most controversial figure on British TV -­ Russell Brand. Bestselling biographer Alice Montgomery traces Katy's steps to stardom from her choir girl beginnings to her breakthrough in the music business and her secret wedding ceremony in India, to reveal the intimate story behind the most exciting and unpredictable pop star around.

Katy Perry: An Unofficial Biography  starts with a lot of background information and facts about Katy's early years and I learned a lot about her life in a very religious family. The book shows how Katy went from having it all when she was living with her family to having nothing when she started her music career and now back to having it all.

The pictures that were included in the book were a good addition; they really showed how Katy Perry has changed and how far she's come. I also thought that Montgomery did a good job bringing in the details of Perry's life including her political views and other people's feelings about her and her fame (including her very provocative costumes). In fact, the ending of the book spends a lot of time talking about the way Katy's mother feels about her and the ways she's changed and moved away from the way her parents raised her. I liked learning about the people Katy has worked with and the songs she's been featured in when working with other people. 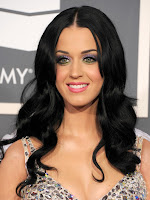 As a big fan of both Katy Perry and Russell Brand, I was interested in reading about their relationship and I loved reading about their wedding. Unfortunately, the parts about Katy's relationships were also the parts I had problems with. The book dragged on a lot about a former boyfriend Katy had from the band Reliant K and his parents and life. This felt like information that wasn't relevant to Perry's story. Even some of the parts about Brand dragged for me and it didn't seem like Montgomery needed to include them. It didn't seem like it was important for fans of Perry to know about other girls Russell had sex with.

There were a couple of errors I found in the book. At one point Montgomery talked about the Disney show "Hannah Montana," but she spelled it "Hanna." In the part about Russell Brand, Montgomery talked about a movie he was in, "Get Him To The Greek," but she called it "Get Me To The Greek."  These kinds of things distracted me, but it wasn't anything that turned me away from the book and it didn't make me think any less of it.

Because I was reading late at night and because I like to end my reading at the end of a chapter, I wished the chapters would have been shorter. I found myself getting bored as I tried to get to the end of the chapters. But Montgomery was able to keep me interested in the book overall. I learned a lot about Katy Perry and liked the book. It's definitely a book I would recommend to anyone who is a Katy Perry fan or is interested in seeing what she's about and where she came from.

Thanks, Miss H! I'm glad we were able to find you a book you liked. Next up for Miss H is a book by Ellen DeGeneres. This is a girl who clearly likes her nonfiction!