The Lost Wife by Alyson Richman

The Lost Wife by Alyson Richman
Published September 2011 by Penguin Group
Source: purchased for reading with the Omaha Bookworms

In pre-war Prague, the dreams of two young lovers are shattered when they are separated by the Nazi invasion. Then, decades later, thousands of miles away in New York, there's an inescapable glance of recognition between two strangers. Providence is giving Lenka and Josef one more chance.

Because, wow, that summary really doesn't give the least glimpse into what this book is about. It's true that Joseph and Lenka are reunited decades after they are separated but the book both opens and closes with the two of them recognizing each other and the improbable wedding of their grandchildren but there is little more than that between them, perhaps twenty pages total.

In between those two scenes, we meet Joseph and Lenka, children of well-to-do Jewish families in pre-WWII Prague who have never wanted for anything. The pair meet through his sister who is her best friend and fall in love without anyone in their families knowing. When the Nazis begin moving into Czechoslovakia, Joseph's family makes plans to leave. Knowing that the only way to save Lenka is to marry her and take her with him as part of the family, Joseph asks Lenka to marry him. She believes that he will be able to arrange safe passage for her entire family. When she finds out on the day after their marriage that he can't, she makes the agonizing decision to stay behind with her family.

Through dual narratives, Richman moves back and forth in time following both Joseph and Lenka as he adjusts to life alone in the United States and she lives through Terazin, one of the Jewish ghettos established by the Nazis, and Auschwitz both of them believing that the other has died. 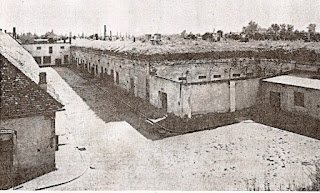 I have, as I suppose most of you do, a hard time reading books about the Jewish experience during World War II. There are no happy endings. Even those who survived carry with them pain that can never fully be erased. The other problem for me is the question as to why the author is writing about the subject. Do they really offer anything new on the subject or will this just be another attempt to put into words something that is almost impossible to describe? I was leery as the book led up to Lenka's family be removed from Prague.

Richman managed to bring something new to my understanding of what happened to the Jews during this horrible time by putting Lenka's family in Terezin. By putting Lenka and her mother into work assignments that allowed them interaction with the artwork done at Terezin, she allowed me to learn not only about the artwork the Jews were forced to do for the Nazis but about the way the Jews used artwork as a means of rebellion. Lenka is first placed in an area where Jews with artistic talent are forced to paint reproductions of great masterworks and postcards. Her mother is a teacher in the school the Jews were able to maintain for the children. All of those involved in any area where they had access to art supplies stole as much as they could so that they could continue to create and so that they could pass supplies onto the children. So of what the adults did was smuggled out as a means to show the world what was happening to them. Most was hidden.

As I am prone to do when reading historical fiction, particularly when I'm planning on discussing it with my book club, I try to learn how much of the book is based on fact. Certainly Richman made up some of the characters Lenka is involved with in her time at Terezin, but many of them were real people. Art really was used as a way to rebel and the children really did create artwork. After the war, over 4000 works of art created by the children and hidden by their teacher, Friedl Dicker-Brandeis, were discovered.

I can't say that I cared much for the story of Lenka and Joseph; I found it to be a little contrived and melodramatic. But I very much appreciated the opportunity to learn about the art of Terezin and, along with that, the incredible capacity of mankind to fight back in any way they can. Unfortunately, none of the other Bookworms had read the book so I wasn't even able to discuss this with them.
Posted by Lisa at 1:30 AM
Email ThisBlogThis!Share to TwitterShare to FacebookShare to Pinterest