Cannery Row by John Steinbeck
Originally published in 1945 by Viking
Source: Sometimes it's a good thing my husband never got rid of a book in got in college - that's where we got our copy which was published in 1981 by Bantam

Cannery Row paints a picture of West Coast neighborhood life in the era following the Great Depression. Mack, the leader of a group of local bums, decides that he wants to do something nice for Doc, a marine biologist and neighborhood genius, so he throws Doc a party in his lab. When Doc returns home—late because he was doing research on the seashore—the party is already over and his lab has been trashed. Ashamed of the mess they’ve made, Mack and his friends make another attempt at celebrating Doc, this time with more success. A series of vignettes, introducing other residents such as Lee Chong, the Chinese grocer who extends credit to help Mack with his party, and Dora, the kind-hearted madam of the local brothel, complements the main story and offers a rich panorama of life on Cannery Row.

My Thoughts:
Well color me embarrassed. I've avoided Cannery Row (much as I have all of Steinbeck) for decades because I had this impression in my mind that it would be a story dripping with testosterone and depressing as hell. Well, sure it is a novella largely populated by men, but it never feels like a book solely written to appeal to men. And it is not, in any way, depressing. It is, at it's heart, about friendship, camaraderie, and being content with the life you have. There is a couple that lives in an old locomotive boiler for heaven's sake, and they are just fine with that.

Using a series of vignettes to introduce his characters, Steinbeck weaves their subplots into the greater plot. Although, to be honest, it's not really much of a plot, more of a way to tie all of the characters together. And what great characters they are. Most are more flawed than not but Steinbeck takes care to portray the good as well as the bad. Mack and his friends have no qualms about stealing the things they need or manipulating people to get what they want yet they twice work together to plan a party for Doc. 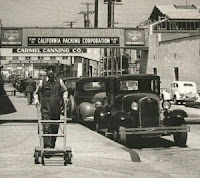 
"Cannery Row in Monterey in California is a poem, a stink, a grating noise, a quality of light, a tone, a habit, a nostalgia, a dream. Cannery Row is the gathered and scattered, tin and iron and rust, and splintered wood, chipped pavement and weedy lots, and junk heaps, sardine canneries of corrugated iron, honky tonks, restaurants and whore houses, and little crowded groceries, and laboratories and flophouses."

You can just picture it, can't you? Three Steinbeck novellas, two successes. I think I'm just about ready to tackle one of the biggies. Anyone up for an East of Eden readalong?

Posted by Lisa at 10:45 PM
Email ThisBlogThis!Share to TwitterShare to FacebookShare to Pinterest