What is the one thing that someone battling her way out of a reading slump does not need? That's right, more books. Yet I am drawn like a moth to the flame by the weekly Friends of the Omaha Public Library Book Sale. Weekly. Just a few blocks from where I work. Open only on Thursdays, the day I get off work early. Seriously people, the only thing that saves me is the fact that they only take checks or cash, both of which I don't always have on me.So recently I've walked out with only one or two books. Thursday I had a crisp new twenty dollar bill. And that's how I came home with five books on audio, four paperbacks, one hardcover and $3.75 in change.

Here's what I picked up on audio:


The Dante Club by Matthew Pearl - this is the one I popped in the CD player as I left the library. When the lead in music was from Vivaldi's The Four Seasons, I liked the book already.

The Brief and Wonder Life of Oscar Wao by Junot Diaz - Diaz just won a Genius award so that means I had to buy this one, right?

The Last Days of Dogtown by Anita Diamant - I read The Red Tent a couple of years ago but I hadn't heard of this one.

A Golden Age by Tahmima Anam -I actually own this one in paperback. I've owned it for several years; maybe now I'll finally get to it.

Paper Towns by John Green -My first John Green - I've been hearing great things about him so I decided it was time to try another young adult book.

In paperback I picked up:

Under The Tuscan Sun by Frances Mayes - I've seen the movie adaptation starring Diane Lane. I understand the book is quite a bit different but still...Tuscany? How can you go wrong? 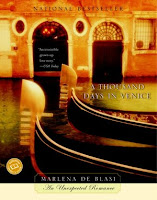 A Thousand Days In Venice by Marlena De Blasi - this one was recommended to me by my aunt and uncle some time ago.

A Year In Provence by Peter Mayle - which the volunteer at the sale told me I must read with a glass of wine in my hand. I can do that.

And for a measly quarter, I found A Gate At The Stairs by Lorrie Moore. Every time I go to the sale, I learn something new. This time it was that anything with a red X is only a quarter. This could be a very bad thing to have learned!
Posted by Lisa at 1:30 AM
Email ThisBlogThis!Share to TwitterShare to FacebookShare to Pinterest