A Lost Lady by Willa Cather 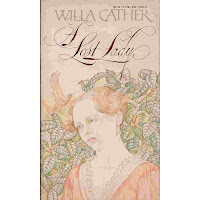 A Lost Lady by Willa Cather
First published in 1923; my copy published in 1972 by Vintage Books
Source: I bought this one for a college English class

Publisher's Summary:
Marian Forrester is the symbolic flower of the Old American West. She draws her strength from that solid foundation, bringing delight and beauty to her elderly husband, to the small town of Sweet Water where they live, to the prairie land itself, and to the young narrator of her story, Niel Herbert. All are bewitched by her brilliance and grace, and all are ultimately betrayed. For Marian longs for "life on any terms", and in fulfilling herself, she loses all she loved and all who loved her.

My Thoughts:
Clearly I must have read this novella before. How it's possible to have forgotten it is a mystery to me. I'll just blame it on the fact that it's been thirty years since I last read it (never mind that I can vividly remember Heidi which I last read 40 years ago).

Last year the Omaha Bookworms read Cather's O' Pioneers and I rediscovered Cather but now with a much greater appreciation of her writing. After reading A Lost Lady I'm not sure if I'm going to be able to read another Cather novel. How is it possible that Cather wrote another novel that could live up to this one?

A Lost Lady is as much a coming-of-age story about Niel as it is about the downfall of Marian. Niel grows up in love with Mrs. Forrester, putting her on so high a pedestal it would be hard for anyone to not to fall. Of course, she does fall, much to the delight of so many in Sweet Water. For Niel, it is impossible for him to come to terms with the idea that she is not the woman he thought she was.


"Compared with her, other women were heavy and dull; even the pretty ones seemed lifeless, - and they had not that something in their glance that made one's blood tingle. And never elsewhere had he heard anything like her inviting , musical laugh, that was like the distant measures of dance music, heard through opening and shutting doors."

Despite the length of the book, Cather manages to capture the essence of her leading characters as well as the essence of the land on which they live, a land she herself loved. In A Lost Lady Cather makes the distinction between the people who settled the land because they loved and appreciated it and those who came later, who say it simply for its value.


"The freighters, after embarking in that sea of grass six hundred miles in width, lost all track of the days of the week and the month. One day was like another, and all were glorious; good hunting, plenty of antelope and buffalo, boundless sunny sky, boundless plains of waving grass. long fresh-water lagoons yellow with lagoon flowers, where the bison in their periodic migrations stopped to drink and bathe and wallow." 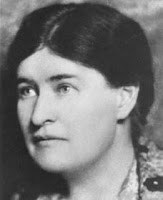 Cather makes readers understand why settlers stopped in a land where the wind could drive people crazy, where the winters were bitter and long, and where everyday could be a fight to stay alive. She helps me better understand my ancestors.

I loved this story. I loved see how Cather revealed the truth about Marian and the way those around her circled her despite her flaws. I loved seeing how Cather echoed the fall of Marian with the decline of the Captain and the land he had so loved. She never hits you over the head with her message; it's all just done beautifully.  Cather really was brilliant; it's a shame she's not more widely known and read. 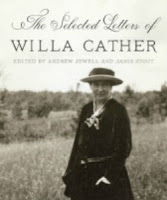 The Selected Letters of Willa Cather, co-edited by Andrew Jewell and Janis Stout, was released on April 16, 2013. This first publication of the letters of one of America's most beloved writers, is an exciting and a significant literary event. Since Willa Cather's death in 1947, the executors of her estate have been bound by restrictions established in her will, including a ban on the publication of her letters. However, under the terms of the same will, these prohibitions expired upon the death of her family members. Now, nearly seven decades after Cather's death in 1947, an anthology of 566 of the roughly 3,000 letters that still exist is being published. - The Willa Cather Foundation
Posted by Lisa at 1:30 AM