A Place At The Table by Susan Rebecca White

A Place At The Table by Susan Rebecca White
Published June 2013 by Touchstone
Source: my copy courtesy of the publisher in exchange for this review

Publisher's Summary:
Celebrating the healing power of food and the magic of New York City, A Place at the Table tells the story of three richly nuanced people—Alice Stone, Bobby Banks, and Amelia Brighton—whose paths converge in a chic Manhattan café. What follows their meeting is just as revealing as everything leading up to that moment, as each seeker takes a different, winding path to embracing life and becoming whole.

In the prologue set in North Carolina in 1929, we meet Alice, a young African-American girl who will go on to become a chef. Her heritage is the basis for a renowned cookbook, yet her past is a mystery to everyone who knows her. Born two generations after Alice, Bobby is a young gay man from Georgia who has been ostracized by his family. Realizing he's no longer safe in his own home, he escapes to New York City, where he finds a job as a cook. Amelia, a wealthy Connecticut woman, finds her life upended when a family secret comes to light, and flees to her aunt’s Manhattan apartment to recuperate.

While these characters—all exiles from different walks of life—find companionship and careers through cooking, they hunger for the deeper nourishment of communion. The narrative sweeps from a freed-slave settlement in 1920s North Carolina to Manhattan during the deadly AIDS epidemic of the 1980s to the well-heeled hamlet of contemporary Old Greenwich, Connecticut, as Alice, Bobby, and Amelia are asked to sacrifice everything they ever knew or cared about to find authenticity, fulfillment, and love.

My Thoughts:
I wish I had written my review of A Place At The Table sooner. I sometimes think that allow a book to percolate in my brain a while will allow me to write a truer review, to ponder the nuances of the book and leave behind the initial emotional response. The problem here is that I would love to be able to share with you the emotional impact this book had on me as I read it. Three books later, some of that has worn off.

In A Place At The Table, White manages to give readers the stories of three very diverse characters each hurt by those they loved the most, each hoping to find love and a place at the table. While all three of the primary characters (and most of the secondary characters, as well) are wonderfully developed, it was White's portrait of a young gay man most impressed me. It's hard to me to know how real it was, but it felt so true. My heart ached for Bobby as he experienced the pangs of first love, had first one and then the other of his parents turn their backs on him, and struggled to make find his place in New York City.

The three characters only rarely touch each other's lives until late in the book; White introduces the reader to first one character and then another. Bobby's story gets the lion's share of the book and I was disappointed when we left him behind to learn more about Alice and then Amelia. Yet White didn't disappoint me for long, as each of them had their own compelling story line. White brings their stories together in a way that is both unexpected and satisfying. No happily-ever-after ending here, just one that feels real. 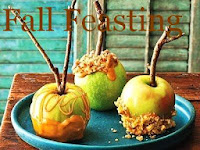 A Place At The Table would make a wonderful book club selection, touching on religion, love, forgiveness, fidelity, sexuality and acceptance. With food playing a big part in each of the character's lives, there are plenty of options for clubs who like to tie their evening's food in with the book. It certainly made a wonderful start to my Fall Feasting and put me in the mood to start preparing the kinds of meals that satisfy more than just our need for food.