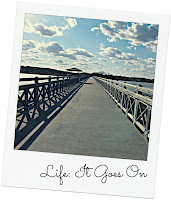 What a good weekend we've had! Friday night we got to attend the wedding of the daughter of some of our oldest friends. The ceremony was in a public garden which was surprisingly beautiful still considering the time of year. There are plants growing there I've never seen before. We enjoyed the band that played for the reception so much that when we found out they were playing in a local bar last night, we headed down with friends to hear them again.

Thursday I finally had time to go to the library sale again and picked up four books on CD. I was disappointed not to find more I was interested in but did pick up a nice variety. Of course, I had to pick up a few books in print while I was there including Mary Doria Russell's The Sparrow.

Then yesterday I got an email that Barnes & Noble had 300 NOOK books for half price so now I have three new books ready on my NOOK including two that I just talked about on Wednesday, Enon and The System. Paris was available as well but I had to draw the line somewhere.

Listening To: I'm listening to Joan Didion's The Year of Magical Thinking and love the narrator on it.

Watching: "Person of Interest," "The Voice," and "Elementary" were all back this week.

Reading: Still working on Night Film but really need to get some reading in this week with two reviews coming up for next week that I haven't started yet..

Making: I bought a roasted chicken the other night and used it with black bean and roasted corn in burritos as well as making chicken salad. I really need to get in the habit of buying whole chickens and roasting them myself.

Grateful for: My sister is now close enough that we've been able to start walking together as we both work toward losing some weight and getting healthy.

Loving: The incredible sunrises I'm getting so see on my way into work lately. I'm choosing to overlook the fact that I'm getting to see these because the days are growing shorter.

Thinking: That as much as I love football, I'm glad neither of my boys decided it was the sport for them as I've watched players getting injured game after game. It's a dangerous sport.

Looking forward to: A less crazy work week this week.
Posted by Lisa at 1:30 AM
Email ThisBlogThis!Share to TwitterShare to FacebookShare to Pinterest
Labels: Sunday Salon