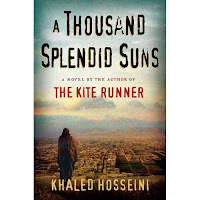 A Thousand Splendid Suns by Khaled Hosseini
Published November 2008 by Penguin Group
Narrated by Atossa Leoni
Source: I bought both of the copies of this one that I own - once again, I have it in both print and audio

Publisher's Summary:
Born a generation apart and with very different ideas about love and family, Mariam and Laila are two women brought jarringly together by war, by loss and by fate. As they endure the ever escalating dangers around them—in their home as well as in the streets of Kabul—they come to form a bond that makes them both sisters and mother-daughter to each other, and that will ultimately alter the course not just of their own lives but of the next generation.

My Thoughts:
Mariam is forced, as an fifteen-year-old, to marry forty-year-old Rasheed. It seems at first that life will be better than expected until Rasheed gradually begins to show his true colors, first by insisting that Mariam wear a burka when they're out in public. When she is unable to give him a son, the beatings begin and eighteen years after they marry, Rasheed takes another young wife. Laila has her own reasons for accepting Rasheed's offer of marriage. Even so, she is much less willing to take Rasheed's abuse than Mariam has been and Mariam slowly begins to come back to herself.

I really wanted to be emotionally caught up in this book; I really should have been caught up emotionally in this book. Mariam's and Laila's stories are heartbreaking, as is the story of what has happened to Afghanistan in the past three decades. War, abuse, constant fear - this should have been a book that kept me on edge but it just didn't. Perhaps it was the experience of listening to it (although the narration is really quite good and I think having the authentic voice added a lot to the story) while driving and not being able to be totally immersed. Still, if for no other reason than to learn a tremendous amount about life, particularly life as a woman, in a part of the world that never ceases to interest me, A Thousand Splendid Suns is a book worth reading.

Posted by Lisa at 1:30 AM
Email ThisBlogThis!Share to TwitterShare to FacebookShare to Pinterest
Labels: Afghanistan, book review, fiction