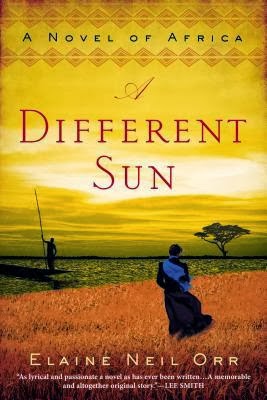 A Different Sun by Elaine Neil Orr
Published April 2013 by Berkley Trade
Source: my copy courtesy of the publisher and TLC Book Tours in exchange for an honest review

Publisher's Summary:
Born into a life of privilege in rural Georgia, Emma yearns for important work. An ardent passion burns in her soul, spurring her beyond the narrow confines of her family’s slave-holding plantation. She meets and weds Henry Bowman, a tremendously attractive former Texas Ranger twice her age, who has turned from the rifle to the cross. Together with their dreams of serving God they take ship for West Africa. Emma leaves every known thing behind, save a writing box Henry has made for her. In it she carries a red journal and an odd carving made by an old African owned by her father. The couple’s intimate life has hardly begun when they are beset by illness, treacherous travel, an early pregnancy, a death. Emma opens her heart to Africa, yet at every turn her faith is challenged. In deep night, she turns to the odd carving for comfort and in snatches of calm makes record in her diary. She redoubles her energies, even as she begins to doubt her husband’s sanity. Yet she loves him. When they hire Jacob, a native assistant to guide their caravan, Emma is confronted with her greatest challenge. Henry’s health begins to fail, and she is drawn deeper into the African world. Something is revealing itself to her. But is it a haunting mystery from her past or a new revelation coming toward her out of this mysterious continent? A compelling story of temptation, courage, faith, and the redemptive quality of love, both human and divine, A Different Sun will transport you to a world where tragedy and triumph lie a heartbeat away.

My Thoughts:
While A Different Sun is much more a love story, it brought to mind Barbara Kingsolver's The Poisonwood Bible in showing readers the impact, ignorance, and arrogance of Christian missionaries who traveled to Africa sure that they were showing the African people a better way, the "right" way in not just religion but in all things. Henry Bowman is one of them but he is also much more - he is a man with a past he is running from which has every bit as much to do with the way he behaves in Africa as does his religion.

Emma carries guilt to Africa as well. As the daughter of a slaveowner, she has felt the wrongness of the things that were done to the people who took care of her. As much as she travels to Africa to spread the word of her God, she does it to atone for what her family has done. But life for a proper young lady in 19th-century Africa was difficult and shocking. Finding out that her husband is not the man she thought him to be is equally as difficult. This one was a slow start for me, despite the story moving along at quite a rapid pace. Orr wanted to get a lot of background in before she sent her missionary couple on their way and while readers get a good background on each of them, it was hard to me to feel I knew them, particularly Emma. Along the way, there were other times when things felt rushed as well but at about the half way point, I finally became invested in the story - the African landscape and people, Emma's plight, even Henry's conflict - and was eager to see what would become of them.

Thanks to the ladies of TLC Book Tours for including me on this tour. For more opinions about A Different Sun, check out the full book tour.  Orr was born in Nigeria to medical missionary parents and spent the first sixteen years of her life there, through its civil war. It's clear she loves the land in her writing.
Posted by Lisa at 1:30 AM
Email ThisBlogThis!Share to TwitterShare to FacebookShare to Pinterest