Under The Wide and Starry Sky by Nancy Horan 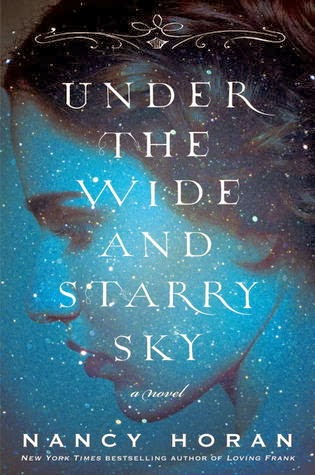 Under The Wide and Starry Sky by Nancy Horan
Published January 2014 by Ballantine Books
Source: downloaded from the publisher via Netgalley for a TLC Book Tour in exchange for a fair review

Publisher's Summary:
At the age of thirty-five, Fanny van de Grift Osbourne has left her philandering husband in San Francisco to set sail for Belgium—with her three children and nanny in tow—to study art. It is a chance for this adventurous woman to start over, to make a better life for all of them, and to pursue her own desires. Not long after her arrival, however, tragedy strikes, and Fanny and her children repair to a quiet artists’ colony in France where she can recuperate. Emerging from a deep sorrow, she meets a lively Scot, Robert Louis Stevenson, ten years her junior, who falls instantly in love with the earthy, independent, and opinionated “belle Americaine.” Fanny does not immediately take to the slender young lawyer who longs to devote his life to writing—and who would eventually pen such classics as Treasure Island and The Strange Case of Dr. Jekyll and Mr. Hyde. In time, though, she succumbs to Stevenson’s charms, and the two begin a fierce love affair—marked by intense joy and harrowing darkness—that spans the decades and the globe. The shared life of these two strong-willed individuals unfolds into an adventure as impassioned and unpredictable as any of Stevenson’s own unforgettable tales.

My Thoughts:
I read Horan's Loving Frank with the Omaha Bookworms several years ago and was impressed with her ability to craft a work of fiction so faithfully accurate to the historical truths of the characters' lives she explored. In Under The Wide And Starry Sky, Horan again tells the story of a man consumed by his creative passion and the woman he can't live without. Surprisingly, Horan has once again found an historical figure who falls in love with a married woman, although here Fanny van de Grift Osbourne's marriage had already fallen apart.


"She no longer had any illusions that her connection to Sam was love. It was something stronger, like tangled veins and shared blood and unholy patterns that couldn't be escaped."

Like Mamah Cheney, of Loving Frank, Fanny was ahead of her time in her desire to become an independent woman living life on her own terms. And, like Mameh, Fanny is leaving her marriage to make and escape but finding the way out is difficult.

Fanny may or may not have had real talent of her own, but her greatest skill seems to have been in helping Louis (as he preferred to be called) get his dreams onto paper and published. That and keeping him alive. Stevenson was forever battling live-threatening illness and Fanny and he lived like gypsies for much of their lives as the moved from place to place for his health.

Both Louis and Fanny were deeply flawed - he was blind to the flaws and bad behavior of his friends and never held a job despite extreme poverty, she was prone to fits of anger that caused her to act first and question her behavior later.

While the relationship between the two, the relationships they have with their families and other literary figures of the time is interesting, the story can get bogged down with too much detail, detail that takes the book to nearly 500 pages. Yet much of the detail also adds immeasurably to the book, including, for me, a stop by Fanny in Omaha and the Stevensons' first impressions of the islands of the South Pacific. Part of the pleasure for me with this book, too, was the way it tied into books that I've recently read, The Painted Ladies by Cathy Marie Buchanan and I Am Madame X which dealt with a painting by John Singer Sargent who also painted the Stevensons.

Robert Louis Stevenson died in those islands at the age of 44. Fanny worked tirelessly after his death to keep his name known.


"Maybe he knew that life is not an even fight," Louis mused. "Given the odds, it's the stand on takes that matters."

In an age when other writers were turning to the gritty reality, Robert Louis Stevenson believed in writing about adventures and dreams. Sadly, his own life was as much about pain as it was adventure.

Thanks to TLC Book Tours for including me on this tour. For other opinions about the book, please check out the full tour.
Posted by Lisa at 1:17 AM
Email ThisBlogThis!Share to TwitterShare to FacebookShare to Pinterest