What Happened To Goodbye by Sarah Dessen 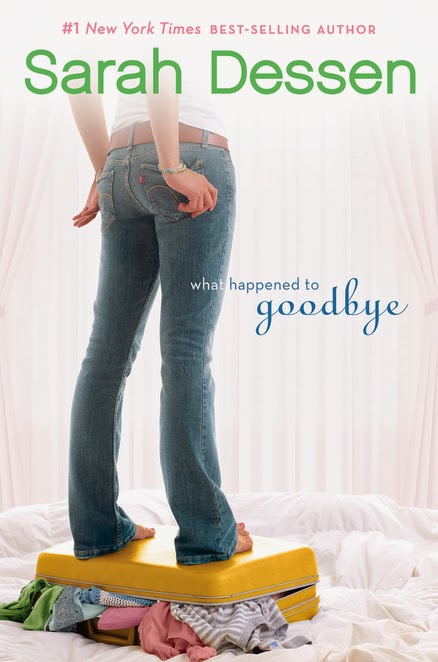 What Happened To Goodbye by Sarah Dessen
Published 2011 by Viking
Source: bought this one for my Nook

Publisher's Summary:
Since her parents' bitter divorce, Mclean and her dad, a restaurant consultant, have been on the move - four towns in two years. Estranged from her mother and her mother's new family, Mclean has followed her dad in leaving the unhappy past behind. And each new place gives her a chance to try out a new persona: from cheerleader to drama diva. But now, for the first time, Mclean discovers a desire to stay in one place and just be herself - whoever that is. Perhaps her neighbor Dave, an academic superstar trying to be just a regular guy, can help her find out.


My Thoughts:
Mclean blames her mom for her parents' divorce. After all, it's her mom who has fallen in love with another man, a man that means not only can her parents no longer remain married but Mclean and her dad can't even enjoy one of their favorite things, college basketball. Blaming her mom means that Mclean has to overlook the part her dad played in the break up. Mclean is like most teenagers, trying to find her place in life and the nomadic life she and her dad live allow her to explore different personas in every place they land. But it also means that she doesn't have time for deep friendships or goodbyes. It's not until she finally allows people to get to know the real Mclean that she realizes how much she has lost.


"What happened to goodbye, Michael in Westcott had written on my Ume.com page. I was pretty sure I knew, ow. It had been packed away in a box of its own, trying to be forgotten, until I really needed it. Until now. "

I've been on a roll with books from the young adult genre lately, a genre I've had mixed feelings about in the past. After loving Rainbow Rowell's Eleanor and Park, I was ready to see what else there was to love about young adult books.

Dessen is hugely popular and it's easy to understand her appeal. Not only does she populate this book with characters young people can relate to and cover topics they have to deal with, she does it all in a way that parents will not have a problem with. There is some drinking here but no drugs, no sex, and no cursing. This takes the edge off the story and makes it feel less like real life.

A project that Mclean and her new friends become involved in seemed like a distraction to me early on and I was never sure I liked it as a device. In the end, though, it plays a big role in the story so I'm left just wishing it had played a smaller role. Dessen also skirted the issue of acknowledging the role Mclean's dad played in the divorce, avoiding dealing with the problems that might cause in their relationship.

Dessen makes it clear early on that, despite all of the roadblocks she throws up, things will somehow work out for Mclean. Sometimes that's just what a reader, especially a young reader, needs.

Posted by Lisa at 11:11 PM
Email ThisBlogThis!Share to TwitterShare to FacebookShare to Pinterest