What We Learned From Sir Arthur Conan Doyle and Sherlock Holmes

When Sir Arthur Conan Doyle wrote his first Sherlock Holmes mystery, policy work was a much different thing than it is today. There was no such thing as collecting blood evidence, no ballistics testing, no microscopic or deductive reasoning used to solve crimes.

Then along came Conan Doyle, with his background as a ship's surgeon, medical doctor, and ophthalmologist who changed every thing through the works of his fictional character, Sherlock Holmes.

In 1887 Sherlock Holmes first appeared, in Conan Doyle's A Study In Scarlet. It was the first time a magnifying glass had appeared in detective fiction. A year later, the first Jack the Ripper murder happened and standard investigative failed. Crime scenes were contaminated and much of the evidence wasn't even collected. The police were sorely in need of new methods for solving crime but it took a fictional character to show them the way. 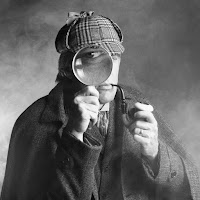 Forensic science as we know it essentially started with Holmes: use of the magnifying glass; sifting and measuring; looking at the small details; smells; collection of evidence; getting down on the ground to see thing from a new angle; ballistic evidence - all of these methods were first seen in Sir Arthur Conan Doyle's stories. Before Holmes, police almost entirely relied on confessions and eye witness accounts, including forced confessions. 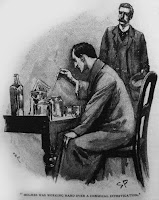 According to forensic scientists, A Study In Scarlet is still relevant today. In a recent PBS program, "How Sherlock Changed The World," Holmes was a pioneering chemist and the Holmes books remain an manual for investigations.

In A Study In Scarlet, Holmes develops a test to determine if a substance is blood before that test had been developed in real life. That test was able to be used in real life for more than 50 years once it became used in real life. He also began toxicology testing and the study of poisons before they had become routine police work.

The most timeless of Holmes' fits was deductive reasoning, the process of using evidence to reach a logical conclusion. Holmes taught detectives how to infer from the evidence and to keep an open mind. 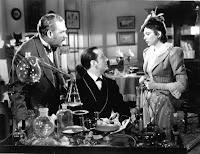 Holmes other great lesson was the concept that every contact leaves a trace (now also known as the "principle of exchange). He had the first crime lab and kept samples to compare later to trace evidence he collected in cases.

Sir Arthur Conan Doyle did have a medical education and training to draw on for his books but no detective experience. How did a man with so little background come up with the ideas that would change police work? There's nothing particularly impressive about Conan Doyle's writing style, but there's no doubt he was one of the most influential authors ever.

Posted by Lisa at 1:30 AM
Email ThisBlogThis!Share to TwitterShare to FacebookShare to Pinterest
Labels: science