Behind The Beautiful Forevers by Katherine Boo 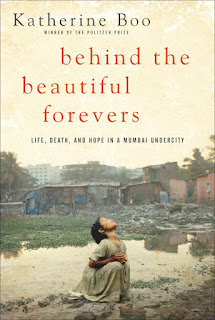 Behind The Beautiful Forevers by Katherine Boo
Published February 2012 by Random House Publishing Group
Source: all mine

Publisher's Summary:
Annawadi is a makeshift settlement in the shadow of luxury hotels near the Mumbai airport, and as India starts to prosper, Annawadians are electric with hope. Abdul, a reflective and enterprising Muslim teenager, sees “a fortune beyond counting” in the recyclable garbage that richer people throw away. Asha, a woman of formidable wit and deep scars from a childhood in rural poverty, has identified an alternate route to the middle class: political corruption. With a little luck, her sensitive, beautiful daughter—Annawadi’s “most-everything girl”—will soon become its first female college graduate. And even the poorest Annawadians, like Kalu, a fifteen-year-old scrap-metal thief, believe themselves inching closer to the good lives and good times they call “the full enjoy.”

But then Abdul the garbage sorter is falsely accused in a shocking tragedy; terror and a global recession rock the city; and suppressed tensions over religion, caste, sex, power and economic envy turn brutal. As the tenderest individual hopes intersect with the greatest global truths, the true contours of a competitive age are revealed. And so, too, are the imaginations and courage of the people of Annawadi.

My Thoughts:
I feel like I've been wanting to read this book for longer than it has existed. I knew it was going to be a tough read but something I "should" read. I blame Thrity Umrigar, who taught me about the slums of India in The Space Between Us, and Aravind Adiga, who taught me how political and corrupt the system is in The White Tiger.

Whatever veil was still over my eyes after those books, has been shredded away by Boo.


""The big people think that because we are poor we don't understand much," she said to her children. Asha understood plenty. She was a chit in a national game of make-believe, in which many of India's old problems - poverty, disease, illiteracy, child labor - were being aggressively addressed. Meanwhile the other old problem, corruption and exploitation of the weak by the less weak, continued with minimal interference."

Boo spent three years talking to the residents of the Annawadi slum, getting them to trust and confide in her, finding the right story to center her book around. In Abdul's family she found the perfect story to highlight all of the ills of the Annawadians, of all of those living in Mumbai slums - a shortage of work, religious conflicts, corruption down to the lowest level, political chicanery, abuse of power by the police, and an ineffective judicial system. They are pawns in a game they don't even know is being played, busy as they are just trying to stay alive, and the first to suffer when the world economy collapsed in 2008.


"Every country has its myths, and one that successful Indians liked to indulge was a romance of instability and adaptation - the idea that their country's rapid rise derived in part from the chaotic unpredictability of daily life. In America and Europe, it was said, people know what is going to happen when the turn on the water tap or flick the light switch. In India, a land of few safe assumptions, chronic uncertainty was said to have helped produce a nation of quick-witted, creative problem-solvers.

Among the poor, there was no doubt that instability fostered ingenuity, but over time the lack of a link between effort and result could become debilitating."

I cannot stress enough how important this book is if you want to understand what it is to live as a poor person in India today and how such a person can feel hope for a better future.