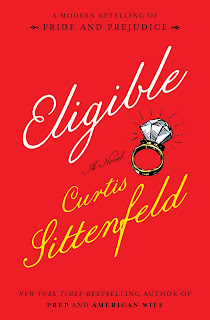 Eligible by Curtis Sittenfeld
Published April 2016 by Random House Publishing Group
Source: my copy courtesy of the publisher through Netgalley

Publisher's Summary:
This version of the Bennet family—and Mr. Darcy—is one that you have and haven’t met before: Liz is a magazine writer in her late thirties who, like her yoga instructor older sister, Jane, lives in New York City. When their father has a health scare, they return to their childhood home in Cincinnati to help—and discover that the sprawling Tudor they grew up in is crumbling and the family is in disarray.

Youngest sisters Kitty and Lydia are too busy with their CrossFit workouts and Paleo diets to get jobs. Mary, the middle sister, is earning her third online master’s degree and barely leaves her room, except for those mysterious Tuesday-night outings she won’t discuss. And Mrs. Bennet has one thing on her mind: how to marry off her daughters, especially as Jane’s fortieth birthday fast approaches.

Enter Chip Bingley, a handsome new-in-town doctor who recently appeared on the juggernaut reality TV dating show Eligible. At a Fourth of July barbecue, Chip takes an immediate interest in Jane, but Chip’s friend neurosurgeon Fitzwilliam Darcy reveals himself to Liz to be much less charming. . . .

And yet, first impressions can be deceiving.

My Thoughts:
While I was reading Eligible, I was enjoying a lot about the book. I was impressed with Sittenfeld's ability to find ways to try to update a 200-year-old novel, her ability to retain each of the characters' essential attributes, and the jabs she takes at so many of the things we take so seriously these days. I had a lot of fun with much of the book and was willing to overlook a lot, particularly in the beginning of the book. I appreciated Sittenfeld taking some liberties, acknowledging that the world is a bigger place than it was for Austen's characters.

(Doesn't it seem like I'm using that word a lot in my reviews lately?)

For me, the more I've thought about this book, the more I'm feeling that Eligible lacked both the bite and the warmth of its source material, Jane Austen's Pride and Prejudice. For example, the relationship between Liz and Mr. Bennett didn't have closeness that Elizabeth and Mr. Bennett shared.

It also felt like Sittenfeld may have tried to put in too many modern updates. Honestly, I think Sittenfeld could have largely stuck to Austen's version of Wickham's previous transgression (here in the character of Jasper Wick) but went with something that wasn't nearly as shocking or nearly as likely to have inspired so much discord between Wick and Darcy. I don't want to spoil the shocking bit of Lydia's elopement but it wasn't because the man she was running off with was, at heart, a bad man. Instead it was for a reason that seemed to have been chosen simply to bring in a more modern issue, a reason that hardly justified Darcy riding in to save the day, which was one of the turning points of P and P.

In Sittenfeld's defense, much of what makes P and P so great just cannot be updated too literally. In trying to stay fairly true to the original story, Sittenfeld is hampered by the fact that the story just doesn't ring true in 2016. A mother might be disappointed to have five adult unmarried daughters but she's unlikely to be desperate to get them all married off and in most parts of the world a family is not likely to risk losing their home because there's not a male heir to inherit the property.

Eligible is a fun enough romp and if the reader doesn't find themselves constantly comparing the book to Pride and Prejudice, I suspect they will actually enjoy the more than those who can't help but do so.