A Month of Faves: This Is How We Read 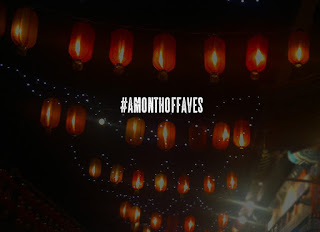 Join hosts Girlxoxo, Traveling with T and Estella’s Revenge for the 3rd annual #AMonthofFaves blog event – a fun way to recap the year that was. They have everyday planned out, so we can join in anytime. There will also be a link-up on all of their blogs – put a link to your post so that they can stop by each and every post to leave comments, high fives, good vibes and well wishes.

Yesterday the hosts are asking us to share "how" we read - number of books read, fave genre, genre we wish we read more of, fave book of the year, where we read...that type of thing. I'm still playing catch up (and since I don't have a whole lot to say about today's topic), here's yesterday's topic today.

Books Read In 2016: By year's end, I will likely have finished 75 books and 3 plays. Of those, 12 will have been nonfiction (made my goal, although I'd still like to be reading more nonfiction), 11 were about or written by persons of color (again, I'd like to up this number next year), and more than half were written by women (for this years Women In Fiction challenge, I stopped recording at 25 but that was months ago).

Favorite Place To Read: Curled up in a corner of the sofa in my family room. It's not the easiest place to read but it's the most comfortable and I'm still surrounded by my family.

Most Read Author: Most years, if I'd read two books by the same author, that would be unusual. This year, I read two books each by three different authors: Fredrik Backman (Britt Marie Was Here and A Man Called Ove), two by Melanie Benjamin (The Aviator's Wife and The Swans of Fifth Avenue) and two  by Greg Iles (Natchez Burning and The Bone Tree).

Favorite Book of the Year: I'm only supposed to give you a hint. If I'd figured out the answer, I would. But I've read so many books this year that really impressed me, I'm torn as to which was my very favorite.

Favorite Genre: Literary fiction remains my favorite genre but I've done a better job this year, I think, of mixing things up, if only just a little. Although, I must admit to having read no sci-fi at all. I would really like to up my game on this genre but I seriously need recommendations of books that aren't too "out there."

Month I Read The Most/Month I Read The Least: Surprisingly, May was the month I read the most, at least the month I reviewed the most books and generally I'm reviewing in the same month I'm reading a book. I read 9 books in May which was also the month I was the busiest. Go figure. There were several months I only read five books; these must have been the months I felt like I was in a reading slump although, compared to average Americans, this is still quite a lot of books in a month so I don't feel as bad.

Favorite Format: I read more books in paperback than any other format with ebooks coming in second (most of those on the iPad, thanks to Netgalley but I've now - finally - figured out that I can get them on my Nook now that it's a Samsung device. Duh). Next is audiobook, which I almost exclusively listen to in my car. I do love the idea and look of hardcover books but for toting around or reading in bed, they just aren't as practical so only about a half dozen or so of those got read.


Posted by Lisa at 1:30 AM
Email ThisBlogThis!Share to TwitterShare to FacebookShare to Pinterest
Labels: meme, month of faves