Hidden Figures by Margot Lee Shetterly
Published September 2016 by William Morrow
Source: my copy courtesy of the publisher and TLC Book Tours in exchange for an honest review

Publisher's Summary:
Before John Glenn orbited the earth, or Neil Armstrong walked on the moon, a group of dedicated female mathematicians known as “human computers” used pencils, slide rules and adding machines to calculate the numbers that would launch rockets, and astronauts, into space. Among these problem-solvers were a group of exceptionally talented African American women, some of the brightest minds of their generation. Originally relegated to teaching math in the South’s segregated public schools, they were called into service during the labor shortages of World War II, when America’s aeronautics industry was in dire need of anyone who had the right stuff. Suddenly, these overlooked math whizzes had a shot at jobs worthy of their skills, and they answered Uncle Sam’s call, moving to Hampton, Virginia and the fascinating, high-energy world of the Langley Memorial Aeronautical Laboratory.

Even as Virginia’s Jim Crow laws required them to be segregated from their white counterparts, the women of Langley’s all-black “West Computing” group helped America achieve one of the things it desired most: a decisive victory over the Soviet Union in the Cold War, and complete domination of the heavens.

Starting in World War II and moving through to the Cold War, the Civil Rights Movement and the Space Race, Hidden Figures follows the interwoven accounts of Dorothy Vaughan, Mary Jackson, Katherine Johnson and Christine Darden, four African American women who participated in some of NASA’s greatest successes. It chronicles their careers over nearly three decades they faced challenges, forged alliances and used their intellect to change their own lives, and their country’s future.

My Thoughts:
I vividly remember sitting in the basement of our family friends' home, well past our usual bedtime, sitting around their television to watch the first moon landing. I remember the news stories about it, the magazine articles, and, in the intervening years, I've watched plenty of movies that told the story of the space race. Never once, in all of these years, in all of those stories, were women a part of the story, let alone black women.

Shetterly was raised with an entirely different view of that world. She grew up knowing that there were black women who worked for NASA and its predecessor, NACA. She was also aware it was not a reality that most of the world knew about. It was not, she discovered once she started her research, a story she was fully aware of either. This a story that is so much bigger than Shetterly anticipated and a story that hits on so many of today's hot topics, so many topics that I'm interesting in reading more about, science, racism, and feminism.

Shetterly focuses on a few of women to tell the story of all of the women who worked at Langley in Hampton, Virginia. In doing so, she also explores how that institute broke barriers in hiring women and blacks, in advancing them, and in breaking down literal barriers. To put it all into context, Shetterly delves in the Jim Crow south, the move to desegregate the south, and the way racism played into the Cold War.

While I sometimes had trouble keeping track of who was who and how they fit in (an appendix listing characters and where they fit in might have been helpful), it is a small complaint which a book I found fascinating. This book is full of information that was new to me or presented to me from an entirely new point of view. Just the other night, I was able to definitely confirm the date that John Glenn first orbited the earth because I had just read this book (and then I might just have gone on at some length about how, before he got into the spacecraft, Glenn specifically requested that Katherine Johnson, not a computer, rerun the numbers for reentry so that he felt comfortable that the prior calculations were correct). 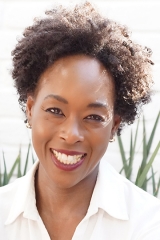 This book is staying on my shelves as a reference book. And now I can't wait to see the movie adaptation.

Thanks to the ladies of TLC Book Tours for including me on this tour; for other opinions of the book, check out the full tour.

Margot Lee Shetterly grew up in Hampton, Virginia, where she knew many of the women in Hidden Figures. She is an Alfred P. Sloan Foundation Fellow and the recipient of a Virginia Foundation for the Humanities grant for her research on women in computing. She lives in Charlottesville, Virginia.

Find out more about Margot at her website and connect with her on Twitter.
Posted by Lisa at 1:30 AM
Email ThisBlogThis!Share to TwitterShare to FacebookShare to Pinterest
Labels: book review, diversity, nonfiction, TLC Book Tours