The Boys In The Boat by Daniel James Brown 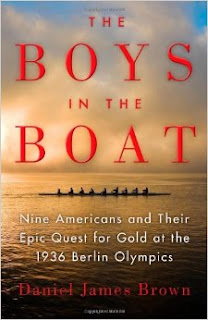 The Boys In The Boat: Nine Americans and Their Epic Quest of Gold at the 1936 Berlin Olympics by Daniel James Brown
Published June 2013 by Penguin Books
Source: purchased for my Nook

Publisher's Summary:
It was an unlikely quest from the start. With a team composed of the sons of loggers, shipyard workers, and farmers, the University of Washington’s eight-oar crew team was never expected to defeat the elite teams of the East Coast and Great Britain, yet they did, going on to shock the world by defeating the German team rowing for Adolf Hitler. The emotional heart of the tale lies with Joe Rantz, a teenager without family or prospects, who rows not only to regain his shattered self-regard but also to find a real place for himself in the world. Drawing on the boys’ own journals and vivid memories of a once-in-a-lifetime shared dream, Brown has created an unforgettable portrait of an era, a celebration of a remarkable achievement, and a chronicle of one extraordinary young man’s personal quest.

My Thoughts:
The title of this book may be a little misleading. This book is about far more than just the nine young men who rowed to victory in 1936; it's also about the coaches who made them ready for that shot (and one competing coach who pushed their coaches) and the guru who made their shells and who probably knew more about rowing than all of the rest of them put together. But it's also, at its heart, the story of just one young man whose life had been anything but the stereotypical life of a rower. By focusing on Joe Rantz, Brown almost gives the story a David versus the Goliath German war and propaganda machine feel.

This book's been getting great reviews since it came out but I kept putting it off, partly because I  clearly wasn't reading reviews (or, for that matter, the title) closely enough. For some reason, I kept thinking it was a survival story and as it came to my attention so soon after I read Unbroken, I just couldn't make myself read another survival story. Just as I finally realized what the book was really about, one of my book club members suggested the club read it, just the push I needed.

While I have some issues with the book, I'm glad I finally got that push. The story of those young men is as much their story as it is the story of the United States during the worst of the Great Depression and the Dust Bowl, events that you have to understand to really grasp what life was like for the young men competing for the University of Washington's crew teams.

The story wouldn't be complete unless readers also understood what the boys were up against when they finally made it to Germany. I keep thinking there's nothing new for me to read about World War II (well, at least anything I'm interested in reading about) but then I find there is, in fact, something new to learn. Sure, I knew that the 1936 Olympics were a major bit of Nazi propaganda, ruined to some extent by the incredible performances turned in by the United States track and field team. But I wasn't fully aware of how deep that effort had gone or how much emphasis they had put on their dominance in the rowing events.

Likewise, I had no idea how big rowing had been in parts of the United States at the time. It's long been overshadowed by other sports; certainly it's never been a major sport in my lifetime. In the 1930's, rowing was big news, especially considering how few teams even competed. This was the chance for a group of boys who'd led tough lives to really become somebodies. Making that varsity boat, winning those races, getting to the Olympics - Brown really makes readers understand why it was so important to all involved.

Sometimes the book dragged for me. I could have done with fewer details about each individual race and about how the shells were made. Although, I understand, too, that knowing the strategy of races was important to understanding how the Americans were able to prevail in the end. The good news for readers like me, is that it's easy enough to skim those parts and get back to the parts that keep you turning pages. I could also have used a who's-who list - there are a lot of names of and I sometimes  lost track of who was who.

The Boys In The Boat gave me everything I hoped to get out of a book about little guys defeating the big, bad guy and then some. It's a well-researched nonfiction work that tells its story with real heart.
Posted by Lisa at 1:30 AM
Email ThisBlogThis!Share to TwitterShare to FacebookShare to Pinterest
Labels: book review, nonfiction, sports, World War II